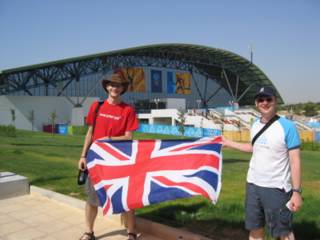 I woke up cold this morning - which was a nice change. We've worked out how the air conditioner in the room works then. Off to watch some table tennis today (have to keep making a mental note not to call it 'ping pong' - apparently they think that's derogatory). It's being held in the same place as the rhythmic gymnastics (that's the stuff with the balls and ribbons) but sadly I won't be attending any of that. As we arrive (cab again, looked too damn tricky by bus) it looks like we have the hot ticket for the day - there are hundreds of chinese outside with fistsful of dollars trying to get inside. Seems a bit odd, but apparently the like this kind of thing. We get inside and see why - it's the men's singles semi-finals, and the first game is china vs china. It's interesting up to a point to see how hard they hit the ball, how skillfully they return it, and how much spin they put on it, but basically it's hard to get too interested. One of the chinese guys wins and we move onto the next game, which is Korea v Sweden. There are hundreds of mental swedish fans in the place (now that's not a sport I would imagine was all that big in Scandinavia, but there you go. Apparently Jan-Ove Waldner is a Swedish Legend). The swedish guy loses after a few good rallies, but the Korean guy looks too good (and indeed he goes on to win the gold medal. I thought that might be it, but we then get to see the bronze medal match in the women's singles between Korea and Singapore. The Korean girl is amazing. She seems to have only one shot - the slice - and she plays it every single time. EVERY time. I guess if her opponent works this out, then she's in a whole world of trouble, or maybe it's a tactic specially designed for her current opponent. Either way, it works and she wins. We then get the gold medal match between China and the Peoples Republic of Korea (who seem to have one fan, whereas there are heaps and heaps of Chinese fans, who perhaps have moved on now the badminton is basically over). China win the gold.

Still - off to the stadium for my first taste of the athletics, including the 100m final....