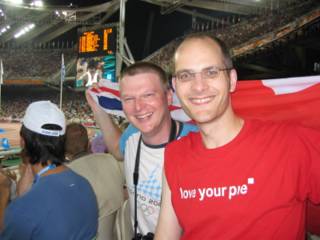 Had my first proper souvlaki on the way to the stadium. Quite tasty, although better are to come. During the course of this meal, we also managed to have an excellent conversation about Def Leppard, Toto, REO Speedwagon and the like - why? well we like to tease JVP about this. He claims not to be a fan of this kind of music, but my goodness he knows a lot about it. Know any Toto songs apart from Africa? JVP does. Very funny. As with all things crap-music related, this soon leads us into thinking about our mutual friend Des and his ropey taste in hair metal....

This is a pretty big night at the athletics. Why? Well because we are going to get to see 8 strutting, pompous peacocks run up the track in about 10 seconds. Yup - it's the 100m final.

It's also the women's marathon tonight. We consider going to watch the finish at the old stadium to cheer Paula in, but decide to head up to the main stadium. We wish Paula all the best, and try to keep up with it on the big screens when we get to our seats, but it's bloody hot today. Come on Paula!

Scat manages to leave his camera at the souvlaki house (one metro stop down from the stadium) and so after a panicky moment (when he wonders if I picked it up for him - as I did at the airport when he left it lying around) he heads off back there. Lucky for him the owner had hung onto it. Also lucky for him, he was prepared to give it back.

Luke also has a brilliant competitive dad moment in the stadium shop with some kid. They have the Athens 2004 playstation game set up in there for people to have a look at, and some kid had taken Luke on in the 100m - foolishly fancying his chances, not realising that Luke has this game at home and has taken great pride in honing his techinique. He crushed the kid, who apparently was still in the dark ages of button pushing in the sprint to Luke's finely honed analogue stick technique. Amateur!

We've also picked up a couple more medals in the rowing today - a silver and a bronze - and the GB total of 20 is starting to look pretty good against the 28 we won in Sydney in 2000.

When we purchased the tickets for the stadium (about 12 months ago via an application type thing on the athens 2004 website) we were only able to apply for seats in the stadium in pairs, so we have to break up into little gangs once we get in. Tonight I am with Mr. Poll, and we have fairly decent seats around about the end of the longjump run up (the triple jump is on tonight). Luke lucks out and is sat down by the pit. Still, these seats will do. These are category A tickets, and cost us 90 Euros each, but it's immediately obvious where the real best seats are: almost an entire half of the stadium, down the home straight, is taken up by press or dignitary seats. There are literally hundreds of them. I'm not really sure how necessary this is. I appreciate that the media coverage of the games is the thing that makes their profile so large, but do they really need to be sat down there in such numbers? You don't see this at other stadiums do you? The dignitary seats are somehow worse - they aren't full for most of the time that I'm in the stadium, which is a disgrace. There are hospitality boxes at the back behind us, and the people in them seem to spend all their time watching the telly. I think the Greeks are very interested in the Greek performances, but perhaps they are a little less interested than the aussies were in 2000 in the games themselves.

Bad news for Paula in the Marathon when she is forced to drop out after about 23 miles from what we later discover is basically exhaustion brought on by the heat. This is a choker for her, and for the 1000s of fans lining the route. This was supposed to be a banker gold medal for GB, and is gutting. We watch Paula sobbing in the gutter on the big screen in the stadium. A Japanese girl wins, but hats off to Tracey Morris, the optician who qualified for Athens in the London Marathon by knocking about an hour off her PB - she finishes 20-somethingth in a time of about 2:41. This is only slightly slower than her best time, but this is a really tough course (mainly uphill) and in some pretty extreme conditions for a long distance race.

Back in the stadium, both Darren Campbell and Mark Lewis-Francis have failed to qualify for the 100m final. At this point in the games, the GB sprinters are not really doing anything to refute the pre-games criticisms in the papers... At this point we also get to see a couple of paralympic finals - the wheelchair 800m for women and the wheelchair 1500m for men. The former containing British heroine Tanni Grey-Thompson. It's great to watch these guys performing in front of a packed stadium on such a big night of athletics, and I hope we get to see more merging of the two games in the future. Tanni comes last by some distance, but as she comes round the track again with the rest of the athletes, JVP and I stand up and give her a huge cheer whilst waving the flag, and she gives us a little wave and a rueful smile. It was a pleasure to see you perform Tanni, and I don't care where you finished.

It's not really a great night for the Brits all round. As I mentioned, we were at the end of the long jump run up, so we get an excellent view of our triple jumper Phillips Idowu having 4 no jumps (he managed to negotiate an extra jump, for some reason). Still - Christian Olsson makes it a brilliant night for the well represented Swedes in the stadium with a win in the same event (their high jumper, Stefan Holm, has already picked up a gold), so together with Kluft's win in the heptathlon yesterday, they have quite a lot to be shouting about. And that's exactly what they do.

In the women's 100m hurdles heats, we get the not totally disagreeable sight of Gail Devers coming to grief before the first hurdle. I don't like to see anyone hurt, but I have to admit that there is something that I really don't like about Devers, and it's not just the nails (horrid though they are). The home crowd gets a huge boost when their 400m hurdler, Fani Halkia, storms through her semi-final with an Olympic record time. She's pretty and blonde, and the greeks are desperate for a track gold medal to make up for the absence of their hero and ropey motorbike rider Kenderis. Fani later goes on to claim the gold....

None of our girls qualify out of the 400m semi-finals, but we do get to have a small cheer as Michael East makes the 1500m final as a fastest loser (oh the glamour!). Still, the big event of the night is clearly the 100m final... quite a lineup, and it's quite exciting really. In the end the result is:

It's okay, I suppose... but the 100m has been so tarnished since 1988 that I don't think it's quite the same event as it used to be. I'm pleased to have been there to see it though. The rendition of "Zorba the Greek" played into the stadium before the start of the race really got everyone rocking though - full on audience participation. Actually, perhaps that was more fun than the race itself. The Greeks seem to love that tune totally unironically. Good luck to them. Perhaps the crowd had heard that Greece had picked up a gold medal on the rings in the gymnastics. Whatever. The stadium was rocking.

When we get out, Scat is a complete shambles (he has been sitting with Bob, and this seems to happen quite a lot to people who sit with Bob. In fact, we call it being "bobbed"). Despite this, it's really very easy indeed to hop onto a #14 bus and get back to Syntagma square.

Quite a night, but it's the Decathlon tomorrow!