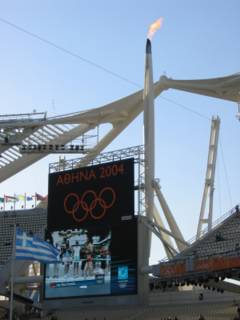 Right well, as I was saying, I kept a journal of sorts whilst I was out in Athens. I also took a whole heap of pictures whilst I was over there. I'm not too sure of the best way of doing this, but I am going to try to stick them up here in some kind of logical order. The idea is to give you a flavour of my time at the 2004 Olympic games in Athens.

We had quite a late flight with Hellas out of Heathrow (22:35) and so I took a half day at work, pootled down to Hinckley to pick up Mik, and then wandered down to Oxford to pick up the rest of the gang. Chilled out for a little while watching some of the swimming and then set out for the airport.

It seems to be a little traditional now that we cut these things really fine at the airport, but we thought we'd left plenty of leeway this time around. Apparently not. Soon enough we hit a massive traffic jam on the M25. For the first 45 minutes it was okay, but then we all went a bit quiet as we all worked out how little we had moved, and how far we still had to go to get to the airport. We were crawling and were starting to sweat a little. Rich was already at the airport, but Luke was on the bus behind us... time to worry. Still, we finally got through it, and to be honest it puts everything into perspective when you see the torn up wrecks of a couple of cars on the slip road between the M25 and the M4. Parked up and headed to the airport for check in. I'd never flown Hellas before, but judging by the check in staff, they're alright with me. She was so helpful and polite. Onto the plane and off into the night.