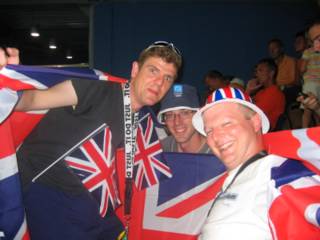 Ah, the first of many shots taken of us looking like gimps, wrapped up in the union jack (or is it only the union jack when it's attached to a boat, and the union flag at all other times?)

Arrived in Athens at about 0430 and promptly hopped into a cab. Ah yes, Athens cabbies. The roads were of course pretty quiet at this ungodly hour, and I suppose the massive spoiler on the back should have given the game away really. Anyway - the madman proceeded to drive us into Athens at an average speed of about 160km/h. All the while cutting corners, pointing out when we could see the Olympic Stadium, and reading the map (oh yes). Terrifying.

Anyway. Arrived at the hotel Thesseous in one piece. The second cab arrived about 20 minutes later.... Let me tell you the story of our accommodation. The finding of decent accommodation has long been one of our biggest worries for the whole trip. Scat was in charge, and had made a herculean effort to find somewhere reasonable, book it, and then keep ringing the owner up to make sure that the booking was still good. The guy wouldn't take a deposit, which was a worry, but Scat rang up a couple of days before we came out to warn the guy how early in the morning we would be arriving and to make sure it was all still okay. So what happens? We turn up, and this unbelievably seedy chap opens the door up and tells us he's full. But we have a reservation! Ah yes... but many people make reservations and not everybody turns up. We are full, but someone may leave later on today. ARGGHH! The guy tells us we can leave our bags there if we want to go and look for something else, but as we troop upstairs, we can see that people are sleeping on the floor of the kitchen, which hardly inspires us with confidence. It's a nightmare scenario - the middle of the Olympic games, we have tickets for a morning session at the swimming, and our accommodation has fallen through. We decide that we need to find somewhere guaranteed, and so we head off into Syntagma Square, flop out at a cafe with some much needed coffee. It's 6am. What the hell are our options.

Luke comes into his own here - he grabs hold of some of the books and starts ringing people up. As you might expect, lots of them are busy, but not all of them. A couple of the guys go and chase a couple of leads, whilst Mik and I pop into the nearby Carlson Wagonlit to get them to do a search. Nothing doing. All booked out all over Athens. Luckily we found the Student & Travellers Inn. It's clean, air-conditioned and bang in the middle of the Plaka and 5 minutes from the Acropolis, but most importantly of all it has enough room for the 8 of us. The downside?? It's an unbelievable 100 Euros per person per night. We quickly decide we have no choice as Luke, John and I need to get to the swimming, so we settle down. Even at this point it seems unlikely that we will look for anywhere else. A rip-off sure, but at least they are cheerful about it and are charging everyone else the same.

GB has been having a ropey time of the games so far, and some of the press coverage has been pretty negative. Then a bird shits on me as I sit outside the Alpha Bank waiting for the guys queue to pick up some tickets. Lucky for me, I'm wearing my big hat, but it makes a big mess all the same, and I am forced into some emergency cleaning routines. Not pleasant, but I've heard it brings good luck, and given what is to follow for Team GB, I think we can tentatively say that this must have been the turning point!

So - off to the main Olympic complex to watch the swimming. Fail dismally to find the bus stop (or at least to find an Olympic bus #14 stopping at it!) and so we cab it. Again - Greek Cabbies. Helpful, but with no real idea of how to get to the drop off point. After a bit of frustration and some helpful conversations with policemen through the window when they decide to ask US where we are trying to go, we get close enough and go in.

First impressions are that the security is good. The bag is scanned and you walk through a metal detector. They are also very polite about the whole thing, and the Athens 2004 volunteers are an absolute delight: smiley, helpful, chatty.... brilliant. The site is massive though, and we walk past the tennis centre, the main olympic stadium, the gymnastics hall and over towards the velodrome before we get to the aquatic centre. First impressions? All looks pretty good, but you can see that the Greeks just ran out of time on the landscaping front - there are very few plants and some very new looking turf, but mostly we're talking about gravel... which means that when the wind gets up, the site gets a little bit dusty. We're late, and have managed to miss every single one of the 50m freestyle heats. Ah well. We still get to sit there soaking in the atmosphere and watching a succession of heats for things like the women's 800m free style and the men's 200m fly (where we get to see Michael Phelps qualify as 3rd fastest - he goes on to win gold, naturally). Experience the Olympics first hand for the first time, and discover that everyone is so nice - you can happily chat to your neighbour. Luke gets friendly with one girl who gives him a pin and her phone number (pins are big, and as she's religious, she's unlikely to be getting a call back) and John gets friendly with a lovely brazillian girl as we walk over. Everyone is so chatty, the weather is gorgeous, and my first 2 euro heineken slips down a real treat after the morning I've just had.

Man this post is getting long. Just imagine how long the day was for me......

Hotfoot from the swimming over to the Goudi Badminton centre to catch the british pair of Nathan Robertson and Gail Emms in the mixed doubles final. Needless to say, rather a lot of Brits have had exactly the same idea. We sit through a couple of other matches - the women's singles final (after which I see my very first Olympic Medal ceremony) and the men's semi between Denmark and Korea. All very interesting, but not what we're here for. The brits come on to huge cheers, and promptly lose the first game 15-1 against a rather showboating Chinese couple. Luckily they win the next 15-12, which gets us all very excited, and the final game is really tense - despite leading for a long time, they bravely go down 15-12. Brilliant. I've never been so interested in badminton!

The day isn't over yet though. It's back across to the main olympic complex for the tennis. To be honest this is a bridge too far. We try and see Navratilova, but give up, and end up on centre court watching Mardi Fish. By the end of the first set we are basically all asleep, having been up for the best part of 2 days, so we head off back to the hotel. Because we are so tired, we make the fundamental mistake of stopping for food at one of the restaurants on the main tourist drag right next to the hotel - basically because we don't have the energy to fend off the waiter and need to eat. It's terrible. It's one of the basic rules of life that you should never eat anywhere that has waiters that harrass you, have pictures of food on the menu and the menus are laminated. A beginners error.