Everyone's got something to hide (except for me and my monkey...)

Everyone seems to be getting married at the moment:

- my elder brother got married in August (and is having another ceremony in Korea in May, but that's another story)

- my younger brother is getting married in January

- C's brother is getting married in France in August.

You know how people always say that you should time your wedding carefully so that it doesn't clash with a major sporting event (like England playing in the World Cup, or the FA Cup Final or something)? Well, the last on that list - C's brother - is due to take place in Orleans on August 27th.

Yes Sports fans, the weekend of the 4th Test Match between England and Australia at Trent Bridge.

Clearly I have no realistic alternative but to go to the wedding, but please allow me a couple of moments of grief.

I booked the tickets a few months ago (already sold out) and it has been in my diary for months. It's an annual tradition that began even before I moved to Nottingham in 1997 - stacks of my friends pile up every year for the cricket, and we make a weekend of it. We do fancy dress on the Saturday (previous years have seen us do Star Wars, Santas and the Flintstones...) The Ashes tests are the highlight of the cricket calendar, they have some of the very best players in the world, and are usually a real treat to watch, even when England are getting thumped. This time around we look as though we just might have the team to give them a game, and the 4th test out of a 5 match series is liable to be absolutely critical.

But I'll be in France.

Perhaps I could wear my santa suit to the wedding? Would the French be OK with that? 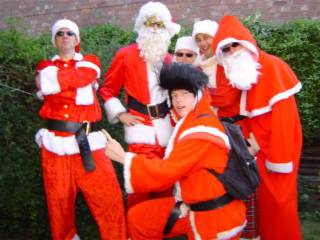