I look to the stars and the answers are clear... 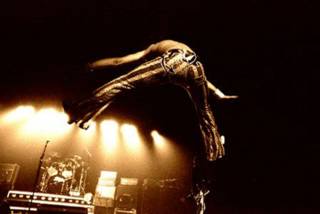 Ok, now it's official. The Darkness are the new Spinal Tap.

I know there's been a long running debate on this subject, but having just seen them at the Nottingham Arena this evening, and heard them debut some of their new songs, I can confirm that they are indeed a comedy band. Now, don't get me wrong. I like them. It's just difficult to draw any other conclusion when you hear songs called (and I'm guessing here) "Making Out" which includes lyrics about getting tangled up in your jumper on the back seat. Another song talks about "wrap your dinner lady arms around me", and the song that takes the biscuit is a new version of "An English Country Garden", where Justin sings about entering all the competitions at the village fete (this one is quite good to be fair).

It was a good show. You can't go wrong with fireworks & flamethrowers generally, but when they are joined by roadies in Santa suits, giant christmas trees and (the piece de resistance) a guitar solo played whilst riding over the crowd on a leaping white tiger, you are really in the realm of the Gods.... (actually, on the Spinal Tap theme - the first time Justin appeared on this, at the crucial moment of "Love on the Rocks with No Ice", he launched into the guitar solo, only to realise that his guitar wasn't working. Cue something of a pause, and then the moment that lifts this band up amongst the greats: he went up to the microphone, said "I'm not going to let a little technical hitch ruin my night, and neither should you", and got back on the damn thing, and rode it back the other way -tiger now facing the wrong way- and finished off his guitar solo. You didn't see Spinal Tap get back into the pods, did you?)

It was their first gig as the headline act on an arena tour, and I think they were a little bit excited and nervous about it. Well they might be. They are a fantastically entertaining band, sure, but I don't think you are meant to headline arenas on one album's worth of material. Try as they might, there were inevitably some lulls in the set as they played something we didn't know inbetween the tracks we did. Ending on "Christmas Time (don't let the bells end)" was a nice touch though, as was the gentle piss-take of the Chris Martin intro to the band aid single. I think Justin Hawkins was born to play the keyboard-as-guitar thing as well....

Ash were the backing band (I know, ridiculous, isn't it??) Thanks to the lovely C., we arrived a little late and missed "shining light", but they showed how good a live act they are with great renditions of the new stuff mixed in with the old ("Orpheus" is just magnificent though). I really must go and see them again if they tour solo.

A visit to the Doctor this morning meant that this was my second ever concert with a set of earplugs in place.... regular readers will know that I have been fretting about my ears for some time now, and indeed the doctor told me that I have a problem with my Eustachian Tubes that may take some months to clear up (although the good news is that it should clear up). To be on the safe side, this means I have to lose a bit of atmosphere at a gig to protect my long term hearing. mmmm. Coincidentally, the only other time I did this was at an Ash concert at rock city. Within a song I had taken them out. This time I stuck with it. It wasn't ideal, but needs must.

Anyway - a decent evening's entertainment. I'm off to bed now though, if you don't mind, because I am day-tripping to Newcastle tomorrow for work. Yes. Day-tripping.

Perhaps I shouldn't bother going to bed at all?