What do they know anyway? 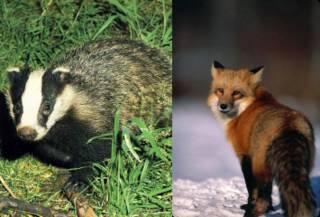 Foxes and badgers are pretty cute, aren't they?

Brock the badger, badger from The Wind in the Willows - gruff, grumpy but unshakeably wise, strong and loyal. Reynard the fox - sly and cunning, but in a cute and fluffy way. (I'm becoming quite partial to this fox in particular.)

It looks like a cattle culling program may be about to kick off in the English countryside. You might remember the foot & mouth problem that brought the countryside economy to its knees a couple of years ago... well Tuberculosis could be about to cause a similar scare and there may have to be a slaughtering program - the Department for Environment, Food & Rural Affairs (DEFRA) has been looking into it, and has conducted a trial cull of the badger population.

Thing is, it looks as though our gruff friend may be part of the problem - they may need to cull badgers as well, as they are thought to be an important reason for the spread of the disease into livestock. This has happened before, and stirs up a lot of emotion and protests.

Would it cause as much fuss if the government were to propose a cull of rats? No, of course not. Because it's cute, fluffy and is the star of children's literature, we will go out of our way to protect and encourage them. Most town dwellers would love to have a badger visit their garden once in a while, just as they welcome the foxes - bugger the fact that they could be (and this is contentious) spreading disease into our livestock

This got me thinking about the government's ban on hunting with hounds. Again, a subject that has caused much debate and protest. The ban is seeing as an unacceptable imposition by a mainly urban government onto the rural community. A pursuit that has been practiced for centuries, declared illegal.

I was all for the ban. Instinctively I don't like hunting, and I don't like the people who hunt (who I tend to associate with the UK Independence Party, for some reason). I also like foxes, and as a town dweller, I love seeing them thriving in our streets. One of my most treasured moments came a few years ago when I had a ground floor bedroom and was awoken in the small hours of the morning one day by a scuffling noise. I crept up to my window and peered out to see two fox cubs play-fighting on a piece of cardboard right underneath my window sill. It was a total joy to see - mum was at the bottom of the garden, watching the cubs (and me) like a hawk. After a bit they scampered off and I went back to bed, grinning like a loon. Foxes are cute and fluffy. Chasing after them for sport and ripping them apart with hounds is definitely not my bag.

I've been thinking about this though, and I'm not sure that I can, on the one hand, rail long and hard about the government's erosion of my rights and civil liberties, and on the other hand think that the ban on fox-hunting is "a good thing". Surely if I am to be consistent, I should be jumping up and down at the removal of another ancient liberty?

Unpalatable though I might find it to admit, I have to say that I don't think that the government should have the right to do this.

Damn you Tony Blair. Damn you for forcing me into bed with the Countryside Alliance.

And with that frankly disturbing mental image... I leave you.