Strange affliction wash over me... 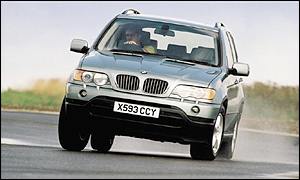 This car is really beginning to cheese me off. Not just this car in particular, but all cars of this ilk. I freely admit that I know very little about cars, and have very little interest in learning about them. I realise that to truly be a man, I should be able to converse about cars freely and eloquently over a pint in the pub.... but I can't. What's more, I don't want to.

This particular model is a BMW X5.

What is it with these cars? They are ABSOLUTELY MASSIVE. Have you ever stood next to one of these things? Its wheels are about 4 feet tall and nearly as wide. It is far, far larger than can strictly be necessary for any road car.

And that's all it is - it's a road car. It will never be driven off-road. I believe the term is SUV - Sports Utility Vehicle.

I'll go further. It is almost certainly driven by a well to-do middle-aged, middle class person. Probably with one or two kids. They rationalise it as a family car. It's possibly a substitute for a little sporty-number. It's a practical substitute for a midlife crisis car, a compromise deal both you and the wife can be happy with.

It's a bloody menace.

Here are some stats (and so I'm not picking on BMW, I'll add in another couple of SUVs as a point of comparison):

The NCAP pedestrian test looks at accidents involving cars travelling at 4okph (25mph) and examines the impact on leg, upper leg, child head and adult head. 4 Stars is the best rating you can get, and means the car is designed to minimise the damage to a pedestrian on impact.

Let's compare this with another family car.... one also capable of taking 2 adults and 2 kids, although certainly smaller.

What does this tell us? That cars are categorically not designed with pedestrian safety in mind (although I would far rather be hit by a focus at 25mph than an X5 - where your best hope is that the damn thing is so big that it will drive over you without touching)

Pedestrian safety is only one of my points though. Just look at the fuel economy.... think of all the fossil fuels being consumed and the greenhouse gases produced. Not only does most of the fuel you put in your tank become greenhouse gas emissions, but the carbon in the fuel combines with oxygen in the air, almost tripling the weight of the fuel itself. So driving a Focus is bad enough, but think that the X5 driver on the same mileage is pumping out THREE TIMES AS MUCH.

I know they have been driving things like this in the USA for years - petrol is so much cheaper, that engine sizes seem to start at 8.0 litres and fuel economy is a non-consideration. It used to be different over here though. Petrol is taxed so highly that we have generally driven smaller and more fuel efficient cars. What the hell has happened?

We should be reducing emissions, not bloody well raising them. Tax on petrol should go up, not down, whatever the bloody protestors say

Come to that, the Kyoto agreement doesn't go nearly far enough - The agreement aims to reduce emissions from industrialised nations only by around 5%, whereas the consensus among many climate scientists is that in order to avoid the worst consequences of global warming, emissions cuts in the order of 60% across the board are needed.

Still, who cares what might happen to the global climate when you get that great "I can see over everyone else" feeling when you drive the kids to nursery?