Just lookin' for some play 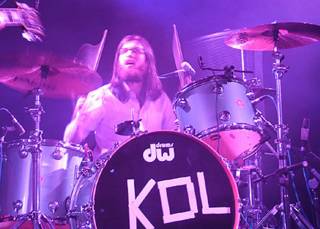 Before I can talk about the gig, I think I am obliged to tell you a little bit about the history of this band. You’re probably already aware of it, because everybody seems compelled to mention it, as it’s so perfect. You really couldn’t make up the Kings of Leon, because I’m not sure that anybody would believe you. The band is made up of three brothers (Jared, Caleb and Nathan) and their cousin (Matthew), the brothers the sons of an alcoholic, itinerant Pentecostal preacher. They grew up roaming the Southern States of the USA, spreading the gospel and living out of a car. Sounds like the kind of mythical back-story that the White Stripes wish they had.

They come from a long-tradition of southern rock bands, and if you were being harsh, you could probably describe them as nothing more than a Lynyrd Skynrd or Allman Brothers covers band. They certainly look a lot like they stepped out of the 1970s. Some of the more ridiculous facial hair from their debut album has now gone, although I’m pleased to report that Nathan, the drummer, still sports a fantastic bit of facial fungus. They are also all extremely young – I don’t reckon that the guitarist would be allowed to drink in the US…

Rock City was absolutely rammed; packed to the rafters. As a venue it has a capacity of 1900, and has a dance floor, a balcony and a slightly raised area on each side with a bar. When it’s this full it must look like a bear pit from the stage, with the dance-floor jumping, people hanging off the stairs up to the balcony, and people jostling for space on the couple of steps around the dance-floor leading up to the bars. Because I am tall, it basically doesn’t matter where I stand at a venue like this, as I am always able to see the stage. C. is less fortunate though, and at Interpol we had been just slightly too far back for her to be able to see much. As a result, for the KoL we fought our way to the edge of the little steps down to the dance-floor, because this is the best spot for getting an uninterrupted view of the stage. We weren’t the only people to think like this though, and it was something of a battle throughout the night, with people jostling past, trying to get to and from the dance-floor and the bar, and a real battle for space on the steps to get a decent view.

Support was The Features – another band from Tennessee. The best way I can think of describing them is of a cross between the classic southern rock of bands like the Kings of Leon and a band like the Eels (the singer’s style was slightly reminiscent of E). They were pretty good, and it’s always nice to see a backing band that somehow makes sense in the context of the headline act. All too often you get a band that look as though they have been booked by the record company (didn’t Talvin Singh once back Suede?), but this time it was conceivable that The Features had been booked by the KoL themselves. It’s also quite sweet when you see a band who set their own gear up before they perform, and when they have finished, put their guitars down and start tidying up after themselves.

The Kings of Leon themselves were brilliant of course. This kind of dirty, swampy rock sounds fantastic live. Caleb Followhill is only in his early 20s, but he sounds as though he has been smoking 2 packs a day and drinking moonshine for years – he has a fantastic raw, drawling singing voice. He also appears to be blessed/cursed with a pitch perfect ear, judging by the frequency with which he made tiny little adjustments to the tuning of his guitar – compulsively at the end of every single song. “This is our last show in the UK for a little while”, he announced to the crowd a little way into the gig, before adding “….except for London, but y’know…” [makes the little wrist motion that is the universal sign for wankers]. How can you not love a band that hates London?

I didn’t bother making a list, but they played a good selection of stuff from their debut album, and most of “Aha Shake Heartbreak”…. They’re a good live band, and as the material on the albums is good, perhaps it isn’t too surprising that it was an excellent show. As a band they aren’t all that prone to small talk or smiling, but they really seemed to enjoy themselves… Caleb even announced that “we don’t normally have fun on stage, but you guys are a blast” and told us later on that it was the best gig of the tour so far. For all I know, he might say that every night – but frankly I don’t care. I saw them at Glastonbury this year, but this was loads better (although, to be fair, have you ever been to a show that wasn’t better than a band’s festival performance?). Someone even threw some knickers on the stage, much to the amusement of the band.

They were ace. Great show.

To round the whole thing off perfectly, during the encore performance of “Spiral Staircase” I learned that I had got some tickets to the Saturday and Sunday of the Old Trafford Test Match next year against the Australians. Nice.

[credit also due here to the Ultimate Olympian for the photo – he used a very similar one on his blog last month. He may have stolen it from the BBC website himself, but credit where credit’s due…]