We Live In A Beautiful World (Yeah We Do, Yeah We Do) 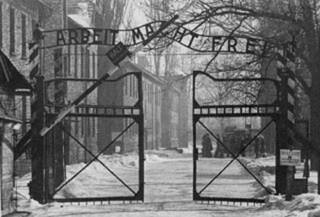 Tonight I thought I was going to pass some comment to mark the 60th anniversary of the liberation of Auschwitz by the Soviet Army. The Holocaust was surely one of humanity's darkest hours, and I wanted to take a deep breath and point at some of the other things happening in the world today that mankind might also do well to feel ashamed of; I was going to make some smart remarks about the foundation of the state of Israel in the aftermath of the Second World War. I was going to talk about the Israeli treatment of the Palestinians. I was going to talk about George W. Bush and his "War on Terror", the brutalisation of civilians in Iraq, the imprisonment without trial of hundreds of people at Guantanamo Bay.... I could have gone on, and on.

But today I just can't do it.

I can't get the images of the gates of the camp in the snow out of my mind, with that slogan "Arbeit Macht Frei", Work Makes Us Free. I shut my eyes and I can see that slow motion piece of camera footage, those first images of the inmates as they were liberated by the Allies, huge eyes blinking at the light as the doors of their huts are opened. I've been reading stories about how the surivors have been traumatised by their experiences, how they have been plagued with guilt just because they lived where thousands of others, millions of others, had died. I read about one woman in her 80s in a specialist home in Canada for Holocaust survivors who started babbling incoherently in German because she heard the same piece of music playing that the Nazis used to play when they made her dig graves. The song? The White Cliffs of Dover.

As usual, the Urban Fox has written a lot more intelligently on this subject than I can, so I suggest you head over there if you want to read some more (and I stole Fox's picture too - so go and see it in its original setting)

We must never forget.