But I promise not to cry anymore.... 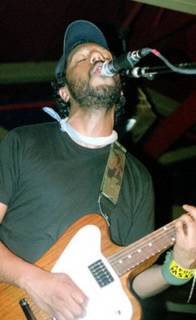 Nottingham Rescue Rooms is a pretty small venue. It's just around the corner from Rock City, and it says it has a capacity of 500, but it doesn't look like it (although I suppose I've never been up on the balcony, and that could be like the TARDIS, couldn't it?). Whatever. Last night, Lord Bargain and I popped down there for the first time since we went to see The Bluetones a couple of years ago... to see The Dears.

It's actually Lord Bargain's fault that I went at all. He heard them on the radio, and managed to persuade me to buy it (without having heard it), on the grounds that it was right up my street, and that if I didn't like it, he would give me the £10 it cost me. Fair enough. They are often said to be reminiscent of pre-Parklife Blur and of The Smiths/Morrissey. Although I kind of know what they mean, I don't really agree. That's not the comparison that springs to my mind. The singer, Murray A. Lightburn (pictured above) has a wonderfully rich baritone, which actually reminds me a little bit of David McAlmont (only a little bit - he doesn't quite have that kind of falsetto range, but who does?).

I have to say that the album ("No Cities Left") didn't grab me immediately. There are a couple of really good songs on there ("Lost in the Plot" being the best), but it wasn't one of those albums that I couldn't tear off my stereo (from 2004 - Interpol, Snow Patrol, Franz Ferdinand...). It's good, but not great. When I saw that they were touring Nottingham though, I thought they were worth a go, particularly in such an intimate venue and when the ticket was only going to cost me £8. Naturally I decided that the least that Lord Bargain could do for getting me into this in the first place was to accompany me on the night.

I had a pint of Staropramen (nice!) from a plastic pint pot (not nice), but I suppose you can't have everything.

Support came from Pure Reason Revolution and Ambulance Ltd. Both were pretty good. Pure Reason Revolution were quite heavy, but had an almost folky vocal harmony style, that I thought was a bit reminiscent of Fleetwood Mac or (oddly) The Mamma & The Papas. The female bassist in particular had a lovely voice. As no gig review is complete without a brief fashion critique, the singer has terrible haystack hair and looks like he used to be in the Wurzels, but on the whole I thought they were pretty good. Ambulance Ltd. are from New York (where I think about 50% of the world's guitar bands are from, the majority of the rest coming from Manchester, Liverpool or, er... Oxford.... oooh remember Ride? shoegazing personified). They seemed alright. Lord B liked them, but I'm afraid I can't really remember anything about them. Not exactly a ringing endorsment, I know, but they were okay.

When they finally came on, The Dears filled the stage. It's a small stage, and there are six of them, including 2 keyboardists, who both have their keyboards facing directly out into the crowd. I suspect they'll have a bit more room when they inevitably play a sunday afternoon slot at Glastonbury - they're that kind of band. They all have their moments, but two of the band catch the eye particularly - Murray Lightburn, of course, but also Natalia Yanchak, who stares glacially out into the crowd for most of the set. She has a lovely voice, and sings the utterly heartbreaking line:

"I have never cried

The way that I have often cried in yours"

During "The Death of All Romance", a duet with Lightburn.

I don't know their songs well enough to be able to give you a rundown of what they played and what they didn't play, but they were pretty good. They seemed to be troubled by technical glitches and excessive feedback, but overall I thought they were a pretty tight unit. The thing that really marks them out though is Lightburn's voice: rich and powerful, and as capable of a harsh bellow as it is of taking off and soaring. He does have a slight Morrissey-esque turn of phrase, I suppose, but nothing I thought was too blatant (although I notice a link to Morrissey's website from their own pages). I certainly didn't hear any Damon Albarn in there, thank God.

£8 well spent, I thought, and it inspired me to put the CD on in my car this morning, which I think is a good sign.

I'm also very much looking forward to seeing Thirteen Senses in such an intimate venue in March....

On the album front this week, I expect I'll be popping out to buy the Bloc Party album, "Silent Alarm". That album title sums them up. They are so of the moment that their album is named after a tidal wave early warning system (and yeah, I did read that in the sunday paper.... had you not realised there isn't an original thought in my head yet?)