But long as there are stars above you

His Dark Materials - based on the novels by Philp Pullman, adapted by Nicholas Wright. The National Theatre, London. 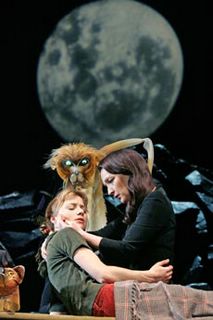 Let's get right down to the plot essentials: God is senile and longs for death; the angels are gay; the Church is a corrupt and power hungry institution that kidnaps and tortures young children; there is no heaven and all who die go to the same grey and hopeless wasteland with no hope of salvation or redemption.

It's enough to make you wonder why the Catholic Church is wasting its time worrying about the Da Vinci code.... The three books that make up the "His Dark Materials" trilogy are surely far more iconoclastic than any conspiracy theory or cover-up that Dan Brown has managed to dream up. Make no mistake about it, a stark anti-clericism runs through these books. All of the great totems of the christian religion are torn down one by one through the course of this book, this children's book.

The three books that make up the trilogy (the Northern Lights, The Subtle Knife & The Amber Spyglass) are amongst the most magical books I have ever read. Forget Harry Potter, there is a craft in these stories that can transport you to other worlds. There aren't many books that have moved me to tears, but these ones certainly did, and you must be very cold indeed if you can read the ending and remain unaffected.

A stage adaptation of the books must have seemed like a very ambitious idea indeed. A folly, perhaps. For starters, there's the sheer bulk of it: there are three lengthy books crammed with character and plot that need to be covered, the best part of 1000 pages. How can that be practically compressed into a stage play? Script issues aside, how on earth can you capture a world where the human soul has a physical manifestation in the shape of a daemon, where the characters include giant armoured bears, where the action takes place across continents, across worlds?

The answers quickly becomes clear: the three books are compressed into two performances of three hours each - still a lot to take in, but just about manageable. The daemons are brilliantly visualised using puppets with glowing eyes, none finer than Mrs Coulter's malevolent golden monkey of course (pictured above), but also including owls, snow leopards, blackbirds, hawks, moths, a hare... and all the members of the clergy either have a snake or a lizard, so make of that what you will....

The set itself is amazing; what starts as a simple, flat and empty stage transforms over the course of the plays: it revolves and it contains many levels that can be raised and lowered as the story requires, taking us seamlessly from the common room in Jordan College to the arctic wastes of Svalbard. It's a magnificent achievement in its own right. 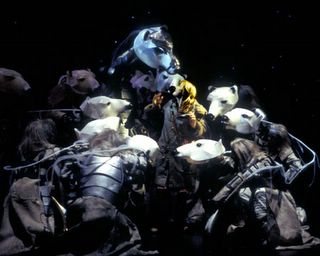 All very technically impressive, but what of the play?

It was wonderful. The script swoops and soars and Philip Pullman's world is brought to life before your eyes. As in the books, an awful lot happens, not least a war taking place across many worlds to overthrow and kill God, but the heart of the story is the relationship between Will and Lyra. The very first scene takes place with just the two of them (and Pantalaimon of course) on the bench in the Oxford Botanic Gardens, and six hours later we end in the same place... this time with most of the audience blubbing like babies. 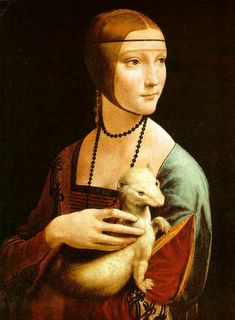 [Leonardo da Vinci, Lady with an Ermine - from the programme, which was full of portraits of people with animals... representing their daemons, of course]

The audience was of course mainly comprised of parents with their excited children. Judging from the conversations I heard during the intervals, everyone was captivated by what they were seeing (although I did see one miserable group of well-groomed elderly people who debated endlessly about the changes that had been made to the script, and how the Church had been introduced too early etc. etc., but I suppose you can't please everyone).

It was a good day out, and an excellent birthday present from C. It wasn't even spoiled by arriving at St. Pancras station at about 22:30 and discovering that the next train to anywhere further north than Bedford wasn't until 23:40. We eventually got into Nottingham station at 02:35, which seems ridiculous. I was more than a little bit bleary-eyed when the alarm went off this morning, that's for sure.

It's a great story, and ever since we left the theatre I have been chewing the themes over in my mind. Does the 'dust' represent original sin? The witches prophecy seems to point to the need for a second Fall, another expulsion from the Garden of Eden, whereas the Church are desperately trying to return the world to a pre-lapsian state, a world without original sin. It's all a bit "Paradise Lost" really. I love the fact that a set of books ostensibly aimed at children can deal with these huge themes in such an intelligent way, and without a shred of condescension. If you haven't read the books, you should really do yourself a favour and check them out.

Although Pullman clearly has no love of the church, to my mind he's actually pushing a humanist agenda here, rather than an atheist one: we shouldn't be seeking to return to the innocence of childhood, we should let childhood go and seek to obtain enlightenment through study and the acquisition of knowledge. We must build the Republic of Heaven where we are, and not look for it in another world.

No fate but what we make.

"Be Excellent Unto Each Other".

Theatre that makes you think. Whatever next?
Posted by swisslet at 22:07