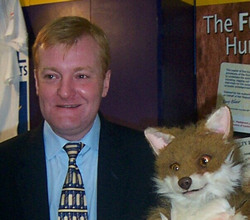 And so to the Liberal Democrats.

They are the last of the three major political parties to launch their manifesto** - the delay caused by the birth of Charles Kennedy's first child a couple of days ago. Indeed, the leader was looking more than a little tired and bedraggled at the launch this morning. Part of this is almost certainly due to the presence of the newborn in his house, but I suspect that as a canny politician, he has realised that this rather unique event has generated him an enormous amount of goodwill amongst the electorate, and has cut him an awful lot of slack, and is determined to make the most of it. Is that cynical of me?

So what policies have they come up with to convince us that they are a genuine alternative to Labour and the Conservatives?

Here's our Swiss with a quick reminder:

If you can be bothered, you can find proper analysis here, although I warn you now, even if you do spend the time reading this, Labour still win.

** Veritas also launched their manifesto today. I won't be covering them, although I reserve the right to laugh at them regularly as they discuss their policies - sorry - policy.
Posted by swisslet at 20:21