wearing tubesocks with style and such an innocent smile 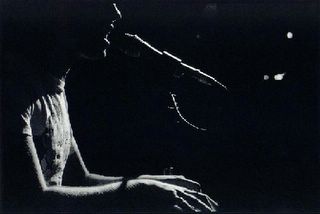 The band came back onto the stage for the encore and launched into "Old Whore's Diet", from the new album "Want Two". Towards the end of the song, Rufus kicked off his shoes to reveal a rather natty pair of striped socks. He then took off his shirt and trousers, revealing that the socks are in fact stockings, and he is wearing some sort of leotard top and a sparkly pair of briefs. A stagehand comes on and hands him a tiara and large pair of wings. The rest of the band have also stripped off and are similarly attired. The song ends, to rapturous acclaim from the audience, who have been eating out of his hand since the first minute. Instead of leaving the stage, the band - still in their pants - don witches hats and capes, and Rufus pops on a pair of red high-heels, and the next song is performed as though by an especially demented Wicked Witch of the West....

Rufus Wainwright is one of those artists whose profile in the music press probably far outweighs their record sales. He has been on dozens of front-covers recently, and has been the recipient of lavish praise from the likes of Elton John ("the best songwriter alive by far") and Neil Tennant ("I can't think of a better songwriter working today than Rufus Wainwright")... and to some extent the impact of this acclaim can be seen in the audience: it is a very mixed crowd, with young hipsters mixing with middle-aged couples and a fair smattering of elderly looking mojo readers (they must have been mojo readers, I can't think why else they might have been there, except that the Beatles broke up a long time ago, and Eric Clapton wasn't playing in the Midlands). I don't think some of them get out very much; towards the end of the concert they were jumping up for standing ovations after every song, which was nice, but good though Rufus was, I don't think they were entirely merited. I saw a similar thing when I went to see Elton John - and spare me the jokes... I've also seen the Pet Shop Boys - wanna make something of it? Anyway, Elton inspired some extremely ill-advised dancing amongst ladies of a certain age. This was similar, only without quite as much dancing.

So was he worth all of the hype? Absolutely. He's a chanteur. A kind of better looking gay Billy Joel, if you can imagine such a thing. Want One and Want Two are a magnificent set of albums, and he was everything I could hope for live. He has a lovely, strong (albeit slightly nasal) voice, and good line in between-song banter (he was very taken with the Robin Hood legend, and seemed to think that the Rufus Oak was in Sherwood Forest). I even think he has the songs to justify some of the praise heaped upon him as a songwriter..."oh what a world", "I don't know what it is", "pretty things", "beautiful child", "the art teacher", "crumb by crumb", "gay messiah".... a particular highlight for me, apart from the ridiculous encore, was his heartfelt tribute to Jeff Buckley, "Memphis Skyline", followed by a lovely version of "Hallelujah", famously performed by Buckley on "Grace".

A fantastic show. As I realised when I was walking back to the car park and saw the baggy-arsed trousered kids with their slipknot t-shirts and bad eye-make up, sadly it meant I missed Atreyu playing at Rock City, but I think I can live with that, eh?

He's playing Glastonbury this year, so if you have a ticket, you could do an awful lot worse than go and check him out... especially if he does that encore....
Posted by swisslet at 20:17