and the night is yours alone.... 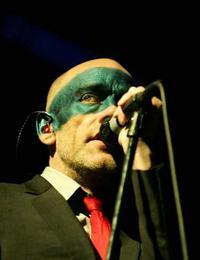 R.E.M. played at the City Ground in Nottingham this evening - the first band to play the venue (and now that Nottingham Forest are in the third tier of English football, presumably the biggest crowd it will be seeing for a while).

I'm beginning to wonder why I bother going to outdoor concerts in the English summer.

I'm not sure what the next concert in my diary is, but I can guarantee you that even if it's indoors it will bloody well be raining. Mind you, it was a bit easier to stand the weather this time, as I knew that I was only about 10 minutes away from my house, and that I could be tucked up in bed about 15 minutes after the end of the concert. Which was nice.

I've seen R.E.M. a couple of times before, and they are a fantastic live act, but I think it's fair to say that I wasn't exactly bowled over by them this time. It's not because they weren't good, or because they were grumpy (they had good reason to be - it seemed to be raining more on the stage than it was on the crowd, and Michael Stipe first had to change into a pair of trainers to try and avoid falling over, and ultimately went barefoot on a load of towels). In fact, Stipe was pretty cheery throughout, even though this is just another leg on a world tour they started over a year ago.

Nah. I think the simple fact is that their last album is just distinctly average, and they played a fair bit of it. It's not terrible, it's just not up to scratch with some of the rest of their material. At their best though, few bands can touch them, and when they can play songs like "Everybody Hurts", "The One I Love", "Losing my Religion", "Orange Crush", "Imitation of Life" and so on, then everything is not lost.

I am really easy to distract at concerts though. I can't help it - people just catch my eye. On Monday it was the really drunk guy standing behind me who seemed to spend most of the concert on the phone to a mate, and today it was the guy standing right in front of me who took about 150 pictures on his camera through the course of the gig (although he left early). I suppose that's ok, but most of the pictures he took were from the big screen, and I couldn't really work out what the point was. Is he really going to look at and enjoy any of those photos? At one point he also started taking snaps with his camera phone, and during the encore he started to record songs as well. I'm a firm believer in living in the moment at concerts.... I've never rung anyone up and held the phone in the air either for the same reason.... I just want to enjoy what I'm watching (except when I'm distracted, obviously). The people with their umbrellas up got short shrift as well - I believe one guy took a direct hit from a pie.... he soon got the hint and took the damn thing down. Pah. Idiots. Twats at Gigs, eh Damo?

Apparently the last time that R.E.M. played in Nottingham was in 1984 at Rock City. Peter Buck remembers it. I was quite impressed. How many gigs in how many cities has that man played since that night 21 years ago? Does that mean Rock City is memorable in a good way or a bad way? R.E.M. have been around for a long time, haven't they?

What's with that eye make-up, eh? Do you think he has a stencil and a canister of spray paint backstage?

To be honest though, what I really want to know is how Lord Bargain got on tonight......
Posted by swisslet at 23:49