I was chatting to a friend over email earlier today. We were talking about how there seemed to a growing optimism in Britain over the last 12 months. We were both at the Olympics in Athens last summer, and were part of the enourmous number of flag-waving Brits who roared the coxless four onto victory in the rowing and had screamed ourselves hoarse as Kelly Holmes came from the back of the pack to win an unforgettable 800m in the Olympic Stadium. We have some brilliant photos from that night; we had all gathered outside the stadium and spent a good half an hour having a spontaneous cheering session with anyone else holding a union jack. As I mentioned below, scenes like these seemed to make an impression on the IOC and had at least some small influence on the decision to award the 2012 Olympics to London. That decision itself, the moment when Jacques Rogge pulled a piece of paper marked "London" out of an envelope, sparked scenes of jubilation from the nation. In my office, I found out that we had been awarded the games when a cheer arose around the office. These scenes were of course reflected across the nation as people gathered together to celebrate the news that we would be hosting the biggest sporting event in the world... in 7 years time. Imagine how excited we were going to get as the big day got nearer.

What's happening to the British? Where is the stiff upper lip for which we are famed throughout the world?

It's not just about the Olympics either. At the turn of the year, the British public were quick to put their hands in their pockets for the victims of the Asian Tsunami and were astonishingly generous. This generosity seemed to inspire Tony Blair and Gordon Brown to give ever larger amounts of government money to the fund, with Great Britain's contributions putting the rather more meagre contributions of the US administration to shame. Blair and Brown continued this work into the new year, when they announced that they were determined to take the opportunity presented by the UK presidency of both the G8 and the European Union to try to make a real difference to those affected by poverty across the world. Hand in hand with this, there has been some real momentum gathering behind the "Make Poverty History" campaign, culminating in the Live 8 concert the other week and the apparently very real determination to try to make our voices heard at the G8 summit at Gleneagles. To quote Nelson Mandela:

"Sometimes it falls upon a generation to be great. You can be that great generation. Let your greatness blossom".

I know there has been a lot of cynicism about this, but I really felt that some of the cynicism and apathy that seem to be the curse of society seemed to be being swept away, and there was a growing will to try and make a difference.

And then this happens: 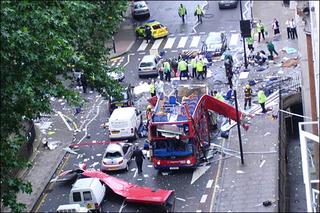 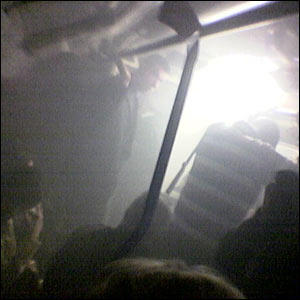 I have lots of thoughts whirling around my head around how we have at least in part brought this on ourselves for a myriad of reasons but primarily for our prominent role in the war against Iraq. I'm thinking how this will be used by the G8 as an excuse to deflect their attention away from talking about climate change and dropping Third World debt. I'm thinking about how this makes it inevitable that our civil liberties will now be further eroded to further the "War on Terror".

I have lots of cynical thoughts, but now is not the time for cynicism.

I am appalled and shocked by the indiscriminate nature of these attacks, and my thoughts are with the victims and their families.
Posted by swisslet at 22:17