I just close my eyes as you walk by 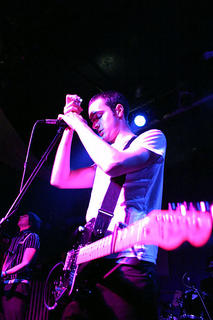 There's something about going to a gig like this that is guaranteed to make me feel old. It's probably a combination of a University town at the start of the new Academic year, a small venue, a fairly trendy band and £8 tickets. I don't think I have ever seen as much bum fluff, experimental hair & low-rent Libertines chic (as if that was possible) at a gig before now. Still, I've had a good innings: chewed a few bones, chased a few cats....

The place was rammed. The balcony was open, and a second bar that I never even knew existed had been opened to cope with the demand for warm, flat Stella. I think everyone who was anyone was there. I saw a white guy with bleached dreadlocks who might even have been W. Axl Rose (which, if he regularly travels to obscure venues in the wastelands of the English Midlands, might go some way towards explaining why 'Chinese Democracy' is so delayed....)

As usual, I was attending the gig with Lord B., and we adopted our customary position at the back of the venue just in time to hear the last chords being played by the support - "We Are Scientists" and settled in to wait for main event.

Now, I don't know if you are familiar with The Editors, but they have managed the neat trick of being hailed in some quarters as startlingly original in spite of the fact that they sound like an Interpol tribute band. To my eyes this makes them at least doubly unoriginal: copying a band who themselves are slavishly copying Joy Division. Still. I like Interpol, and I quite like The Editors' debut album , 'The Back Room', so I was quite looking forward to this. Interpol are quite a stylish band: all fringes, sunglasses and black jackets. They have that studied cool that so many New York bands seem to have. Because The Editors sound a bit like them, for some reason I expected them to adopt a similar look. So when they shambled onto the stage wearing jeans and t-shirts, with the Nottingham born guitarist sporting a Forest scarf, I have to say that I was a little bit disappointed. Singer Tom Smith did his best, frequently grabbing his head and whirling his guitar around behind his head, but basically the band lack charisma.

The whole set was about 40 minutes long, and they pretty much played their album through. My verdict? Much the same as the album really: they have one or two really cracking songs ('blood', 'munich') and a few other decent ones, but they just seem to be missing a little something. Originality certainly.

They're young, and they have some promise.... but to be honest I found them a little bit underwhelming (although a whole lot better than staying in and watching the second part of that documentary on that charlatan, Bob Dylan, that's for sure. I'll never forgive him for that truly awful gig at the London Arena where I actually fell asleep he was so bad.)