And you haven't got the time to remember how it was 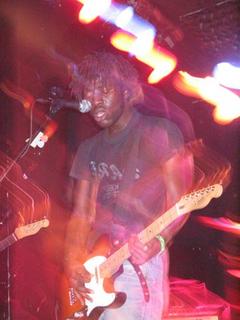 Bloc Party must be in the running for the most talked about new band of the last 12 months. I first saw them on Jools Holland back in December 2004. I’d taped the show, and was selectively working my way through the acts – winding past Elton John, but pausing to watch Keane and then moving on to Interpol. Bloc Party were on, making their first TV appearance I think, and as they launched into “Helicopter”, I thought that I would give them 1 minute to impress me before I hit fast forward and went looking for Interpol’s second song. I never hit that button, and was frozen to the spot by the sheer energy of the band’s performance. The album didn’t come out until February, but I downloaded “Helicopter” from iTunes almost immediately, and then greedily hunted out all the other MP3s that I could find to satisfy my urge to hear as much of this band as I could. I was hardly the only person that the band had this impact on, and they were quickly hyped up as the “next big thing” for 2005. The album was going to be a dead cert.

I think the tickets for this gig actually went on sale about the same time as their debut album was released, when the hype about them (“probably the greatest band anywhere in the world, ever!” -- the NME, probably) was at its peak. Naturally, it quickly sold out – but I was still smarting at missing out on seeing the band when I had turned my nose up at the chance to see the NME tour at the same venue in January (on a bill also featuring The Futureheads, the Kaiser Chiefs and the Killers – Doh!) so there was no chance I was going to miss out this time around, and I snapped up a pair of tickets as soon as they came on sale. All I then had to do was to sit on my hands and wait for October. I saw the band live for the first time at Glastonbury in June, and although they were pretty good, they were a little sterile sounding and it felt as though they were simply running through their album in front of a big crowd. I was looking forward to seeing them in a smaller venue (Rock City has a capacity of about 2000 people, I think).

Rock City is great when it’s full. The balcony and the little steps up from the dancefloor to the two bars turn it into a bear pit, with people hanging off every available space, baying for blood. By the time Lord B and I arrived, the whole venue was heaving, although since the refit and the installation of a new air conditioner, sadly you don’t get sweat dripping off the ceiling anymore. Once again, we’d missed the support, but were there in plenty of time to get a drink and settle in for the main event.

For me, Bloc Party will always be about the drummer. Matt Tong’s epileptic drumming is the lynchpin of the band’s sound, and is the reason why I am totally unable to tap my foot in time to their music. Considering his drumming is so frantic, he actually looks remarkably composed behind his kit. Perhaps, like a swan, he’s paddling furiously underneath the surface. The other key component of the Bloc Party sound, of course, is Kele Okoreke’s yelp. The broadsheets seem to think it’s remarkable to find a black man fronting a guitar band, and there is apparently much idle tittle-tattle about his sexuality (who cares, on both counts). He’s a natural though, and although he was only 24 last week, he’s now comfortable enough with his audience to chat with us easily between songs, to instruct us when to dance and to dedicate a song to a fellow Libran in the crowd when he discovers that it’s his birthday (it doesn’t sound like much, but Bob Dylan doesn’t bother with any of that stuff, and he's been doing it for years....).

They were really good. The crowd were really up for it and the band looked like they were enjoying themselves – both of which have a huge impact on the atmosphere of any concert. They’ve got the songs too: ‘So Here We Are’, ‘Banquet’, ‘Like Eating Glass’, ‘This Modern Love’, current single ‘Two More Years’, ‘Helicopter’….. In a little over an hour, they basically played their way through the whole of ‘Silent Alarm’ and a few b-sides, plus the new single. Much the same as their Glastonbury set, only a whole lot more dynamic. I thought that they lost a bit of momentum towards the end of the set, but all in all, they were ace. If you're into Gang of Four, then you've probably heard it all before, it's true, but I still thought they were great. You know how I generally feel on Sunday evenings, but it seems that an hour or so spent listening to the surging, stuttering, spikey Bloc Party sound is a great way to beat those Sunday blues and to end the weekend on a high.

They were also extremely loud, as I discovered as soon as they had finished playing and not only were my ears whistling in protest, but they also felt slightly blocked. Ah well. The joys of live music, eh?

My next gig is something of a change of pace: KT Tunstall on 31st October.
Posted by swisslet at 18:00