Okey-cokey. A couple of loose ends to tie up.

Firstly: Guess Who The Bookshelf Belongs To....

Answers first, I think, then winners.

1. Variously guessed as belonging to Mark, the Ultimate Olympian, Spin & Fox or as being staged by me. This shelf actually belongs to .... Yoko Spungeon.

2. The most popular guess for this shelf was RedOne, but it actually belongs to .... The Urban Fox

3. You were meant to think that this one belonged to Red..... Bob Dylan, Billy Bragg, RATM, Bill Hicks, Michael Moore and, erm, 'Red Storm Rising'. A few people thought this was Fox, but most of you correctly picked this out as being.... staged by me

4. It gets harder now. Most people pegged this one as the NumNum, but Lord B cracked it - this shelf belongs to.... Mark

5. The copious amounts of reference material and set texts should mark this out as the shelf of a teacher, and indeed, the shelf belongs to.... Mike.

6. Lord B got this one too.... most people were distracted by the iPod and thought this shelf belonged to the Ultimate Olympian, but actually I'm not even sure that it *is* an iPod, as the owner of this shelf prefers an alternative MP3 player (I know!). The shelf in fact belongs to.... The NumNum

7. There was some cracking detective work going on by one or two of you when you correctly identified this shelf as belonging to.... CLM

8. The golf clubs were the clue here - their owner is a former professional player.... The Ultimate Olympian

9. The law books are a dead giveaway, aren't they? This shelf belongs to.....Jenni

10. It's amazing how the quality of the light in this photo acts as such a big clue to the owner. As several of you guessed, this bookshelf belongs to....Aravis

11. Sparser than I would have guessed, but the clues are there with some of those book titles. This bookshelf belongs to.... Spin

12. That leaves just this one - and the Lonely Planet guide to Australia is a pretty hefy hint. This bookshelf belongs to.... Leah

In third place, with a very creditable 6 points ---> Lord Bargain
Runner-up, with an excellent 7 points ---> Spin
but the winner with 8 points ---> Aravis.

Well done Aravis. Drop me a line to claim your exciting prizes!

A special prize (another SwissToni CD) will be shipped out post-haste to the person who sent me a couple of photos of their bookshelves..... yesterday. A little late, but very much appreciated. 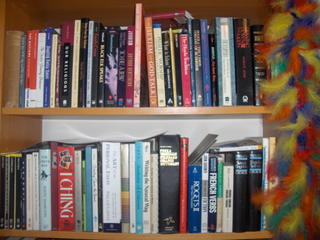 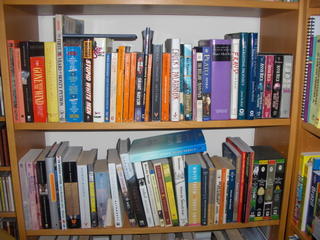 Thanks for sending in your bookshelves and for posting your guesses. I had a lot of fun with this, and I hope you did too.

I'm off out to see Bloc Party tonight at Rock City, but before I go - the answers to the pub quiz questions (in case you were tearing your hair out).

1. Which sitcom had characters called Daphne, Ros, Niles & Martin? Frasier
2. Which cartoon dog appeared with a cat called Custard? Rhoobarb
3. Which Rock singer took his name from a brand of hearing aid? Bono
4. What's the name given to a patch of green in the middle of a desert? Oasis
5. Which season begins after the vernal equinox? Spring
6. Which British film has won the most Oscars? Gandhi
7. Which country did the Romans call Hibernia? Ireland
8. In which city are the headquarters of General Motors based? Detroit
9. Which game features circles of red, green & yellow and playing involves getting really tangled up? Twister
10. What is the name of Roy Race's son? Rocky

1. Which British Politician had an affair with Antonia de Sancha?
David Mellor
2. Who was burned for treason & witchcraft in 1431 and canonised in 1920?
Joan of Arc
3. What was the name of the character from the Wild West, played variously in films by Kirk Douglas, Dennis Quaid and Val Kilmer?
Doc Holliday
4. What was the name of the character played by Pamela Anderson in Baywatch
CJ Parker
and

5. which fictional character is the connection between the last 4 answers???
Reggie Perrin (so they tell me).