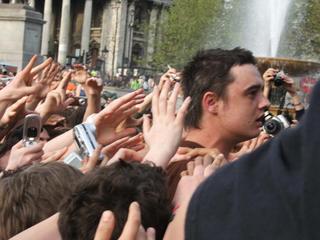 It's all shockingly predictable. Doherty seems to have been completely swept up with the glamour and the fame that his notoriety is bringing him (not to mention the supermodel girlfriend). He is no doubt fascinated by the romantic notion of himself as the latest in a long line of doomed artistic geniuses, and is revelling in the attention. For their part, the press (and I include broadsheets like The Observer here) are just waiting for the perfect end to the story: Doherty dying of an overdose. When that happens they can then cover the candlelit vigils that will be held by his devastated young fans. It's like watching a car crash.

The story in the Observer Music Monthly is a case in point: it's full of pictures of a wasted Doherty collapsed in dressing rooms on his band's latest tour for us to gawk at, but this being a serious newspaper, it also has some excerpts from Doherty's journals, which he gave to the journalist (presumably because he knew they would be published). There are doodles of Kate Moss, photos of himself, newspaper clippings, fragments of songs, a note written to Moss as she lies asleep by his side.... that kind of thing. These are presented as though they are artefacts worthy of display in a museum, when in fact they are just childish toss.

Says I? Who does he think he is? Some sort of urchin from Dickensian London? He's not. He's a 26 year old boy who has seriously lost his way.

The thing I find most frustrating? What happened to the music? to his talent? I listened to the two Libertines albums this afternoon. I was fully expecting them to be poorly excecuted and over-hyped rubbish - but they're not. The first album ('Up The Bracket') in particular is excellent. The musicianship is a little shambolic, certainly, but it's very much a part of the appeal of the band. Doherty and Carl Barat swap vocals to good effect and it's a really exhilirating record. The second album ('The Libertines') isn't up to the same standard, but still has songs worth listening to, especially on 'Can't Stand Me Now', where the breakdown of their friendship is laid bare:

[sung by Barat] An ending fitting for the start
you twist and tore our love apart
your light fingers through the dark
that shattered the lamp and into the darkness cast us...

[sung by Doherty] No you've got it the wrong way round
you shut me up and blamed it on the brown
cornered the boy kicked out at the world...the world kicked back
a lot fuckin' harder now

I can't see how this story can have a happy ending. Nobody seems to want it: not Doherty anyway. If you can see past the record sales, the t-shirts and the posters, there was no romance in the way that Kurt Cobain blew his head off a decade ago, and there will be no romance if Doherty ends up the same way.

Will anybody miss the bright young lad at all?

Is he even still in there?

What a waster, what a fucking waster
You pissed it all up the wall

By the way, my comment about being annoyed with Chris Martin for his repetitive lyrics the last time I listened to "X&Y" seems to have started a small (but growing) confessional for people to come out and say how disappointed they are, on reflection, with the new album. I should point out that, although it's okay for you not to like them, they're still kind of the house band around these parts.....

I was just saying, y'know? I like them, just not uncritically.

Has anyone else noticed that the anti-Christ has put a new album out? Bollocks to Bird Flu - shouldn't we be out marching in protest or something? Is there an innoculation we can give to kids? People might hear it.
Posted by swisslet at 21:59