and now my heart's beset with 18 carat gold regrets... 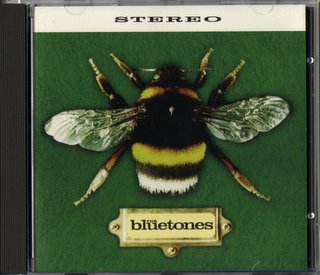 Whatever happened to The Bluetones?

"Slight Return" reached #2 in the UK Singles Chart in early-1996, and their debut album "Expecting to Fly" actually topped the album charts later on that year. They had a string of great hit singles: "Marblehead Johnson", "Solomon Bites The Worm", "If...", "Autophilia".....

And then what happened? I knew that they were still going because I went to see them at the same venue a couple of years ago. Have they done anything recently? I'm not sure how or when, but apparently they've done 5 albums and a greatest hits compilation, but nothing new since 2003. Now there's a flurry of activity because they've got a new EP out ("Serenity Now"), and they've signed a 3 album deal with Cooking Vinyl, the home of Billy Bragg and Echo & the Bunnymen, no less.

So Bargs, Flash and I rolled up to the Rescue Rooms, took one look at the (second) support act, and went to the next door bar. We entirely missed the first support act, naturally. A couple of warm pints later, and when we were sufficiently confident that the support had disappeared, we moved next door. It was as busy as it ever is. Being pretty tall, Lord B and I usually stand right at the back. This time we had the Little Legend with us, so we found a decent spot against the wall up towards the stage and made ourselves comfortable. The mighty Bluetones soon made their entry and kicked into "Bluetonic" - one of their very first singles - and one of my favourites [update: I am reliably informed by Flash that they opened with 'the jub jub bird' but I seem to have blanked that bit from my memory... ah well. ST]. I thought that would be hard to beat, but nope, I'm happy to say that they were excellent throughout - and that includes the new stuff. Initially Mark Morriss seemed quite concerned about something on his shirt-front, but pretty soon he was quipping with the crowd: "You can go home and say that when you saw the Bluetones, the singer rocked so hard his tie-pin fell out!"

Maybe that's the kind of self-deprecating humour that gets you nowhere in the music business.

Surprisingly for a sold-out gig in a small venue on a Sunday night, there seemed to be a couple of hecklers in the crowd. Ignoring them didn't work, so Mark was soon into the crowd to nick one particular idiot's hat (and then to taunt him for his baldness), and later on he was effortlessly shrugging off their abuse to the delight of the rest of the crowd. "If you don't like it mate, why don't you go home? I've already got your money". Cue loud cheers.

So. They were ace. If you aren't familiar with them, go check them out. Great band. If Embrace can be doing an arena tour, then there has to be hope for a band like the Bluetones, right? I mean, they have actually got a singer who can hold a tune and everything...

We bumped into Rufus-Fan and a friend on the way out. Flash must have been proper impressed as they were both splendidly drunk and celebrating the fact that Rufus-Fan is finally starting her own blog.... link to follow when I get it..... that was it, wasn't it? Oh yes... and I think you were also raising a glass to the fact that confirmation has just come through that she will be taking a year off work to travel around the chuffing world, starting in January. That's all very well, I suppose, but surely there was no need to give that horrible looking guy from the support band your mobile number, was there? They were *dreadful*.

Anyway. The Bluetones were great, and I was horrified to discover at work this morning that I foolishly haven't got any of their stuff on my iPod. I am busy rectifying that mistake as we speak....

It's Starsailor on Tuesday, then Dr Karl Kennedy on Sunday, and then the Bravery the following Sunday. Sad to say, I think I'm looking forward to the middle one the most. Do you think he'll bring Susan on for the encore and do a version of Neighbours classic "Especially For You"? I reckon it would bring the house down.
Posted by swisslet at 18:32