Look at us through the lens of a camera

As conversation openers on AIM go, that's quite a good one. It turns out that the numnum was going to be meeting the great man at an awards dinner, remembered that I had a bookshelf full of Wisdens, and thought that I might appreciate the chance of a signature. 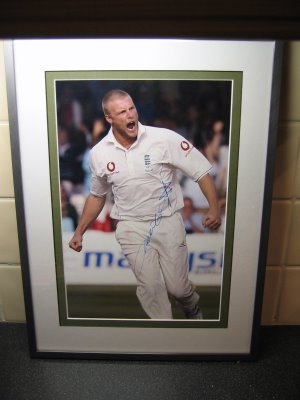 Big thank you to the numnum for the offer and for putting himself out on my behalf. Big thanks are also due to Icy, who not only took delivery of the photo that I sent down to casa numnum, but also made the trip to the post office to send it back once it had been signed, paying for the stamps herself.

I picked up the picture from the framer this morning, and it will now take pride of place in my cave, somewhere between the signed Stephen Wright photo of Morrissey & Marr, the Manet print of the Venetian Grand Canal, the poster of the cover of Abbey Road, the picture of the first Ali / Liston fight and the photo of Han Solo.