Making you feel like there's going to be a war... 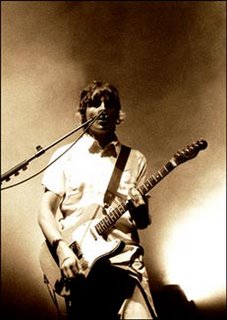 I'm not quite sure what it is, but there is something fundamentally dislikeable about Starsailor. Let's for a moment compare them with their near contemporaries, Coldplay. Whatever you think of their music, most people will not have a bad word to say about the band. Chris Martin sounds like a nice chap. He seems to be a bit of a worrier, and you get the impression although he's got an Oscar winning actress as his wife, that he has sold millions of records and has millions of pounds in the bank, you could probably go up to him in the pub and chat to him. I don't get that impression with James Walsh. He has a fantastic voice, sure, but he seems like a bit of a knob. He seems to have an inflated sense of his own importance.

The last time I saw Starsailor was at Glastonbury in 2003. The band were plugging their second album, and they had a slot in the late afternoon. They were terrible. They seemed to completely misjudge what the crowd wanted, and at one point they wheeled Donovan onto the stage as a "Glastonbury Legend" and wasted 15 minutes of their set with some terribly misguided duet with the hoary old folkie. I imagined that would probably be that, and that I would not see or hear from them again.

Starsailor emerged as one of the bands that people had heard about before they had actually released a single thing; they were one of those bands that the music magazines thought were going to be massive. I saw them at Rock City a little after their debut album had come out, and the place was absolutely rammed (mainly with students, as I recall) and the band themselves were fantastic. They had the songs (especially the majestic "Good Souls"), and in Walsh's voice, they seemed to have something a little bit different from the rest of the pack. They had a few hit singles around this time ('Lullaby', 'Alcoholic', 'Poor Misguided Fool'), and everything seemed to be going pretty well. And then the second album came out, along with word that Walsh's head had disappeared up his own arse. "A Rush of Blood to the Head" it clearly was not.

I thought it was quite revealing that they only played two songs from this album in their set tonight... showing what the band themselves think of the material. "Silence is Easy" is a great song, and closed the set... but the rest? Hmmm.

Since that Glastonbury appearance, Starsailor have acquired an additional guitarist to beef up their sound and have released a new album. As I hadn't exactly rushed out to the shops to buy it, Lord B was good enough to lend me his copy of "On the Outside" a few weeks ago. It's fantastic - it really is. I have to admit that I was really very pleasantly surprised. They played quite a bit of it tonight, of course, and it sounded good. Actually, I think "In The Crossfire" was the best song that they played all evening, and one of the best released this year.

So are Starsailor on the way back then? Perhaps. Rock City wasn't sold out, so they clearly have some way still to go, and James Walsh still behaved like a bit of a tit, albeit a bit less of a tit than he was on the Pyramid Stage at Glastonbury... but they still have the material, and he does have a really excellent voice. Bob Dylan was playing in Nottingham tonight, so we were treated to a snippet of "Like A Rolling Stone" -- I can guarantee you that the old charlatan himself has never sung that song more sweetly than Walsh did this evening.

The verdict? Worth seeing. They'll never be Coldplay, but I don't think the world really needs another Coldplay, does it?