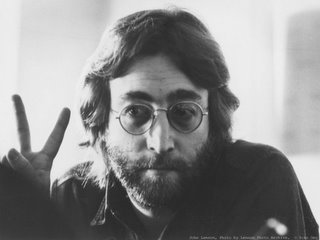 25 years ago today, John Winston Oko Lennon was gunned down outside the Dakota building in New York by Mark Chapman.

I haven't really found myself thinking about his music today though.

Since his death, and partly because of the variable quality of Paul McCartney's output, it has become more or less de rigeur to suggest that Lennon was the real genius in The Beatles. Whilst it may be true that Lennon helped to suppress some of Macca's more saccharine instincts, I think that view is essentially revisionist rubbish. It's not as though Lennon's solo work was untouchably brilliant, is it? Personally, I've never really taken to it. Some I like, some I dislike, and lots I am indifferent too. Even the charms of 'Imagine' have palled through over-exposure.

Instead of pointlessly wondering about the music that he might have made had he lived, I keep thinking about Lennon the peace campaigner. I wonder what he would have made of George W. Bush and his "War on Terror", of Tony Blair and the invasion of Iraq.

Not much, I should think.

I don't know if he would have been able to make a difference, but I think it's safe to say that he wouldn't have been sitting on his arse watching it all happen.

Too many of us are still sitting on ours.

Big up to Red from Run Over By The Truth for reminding me about this anniversary, by the way ....
Posted by swisslet at 20:41