send me your pillow, the one that you dream on 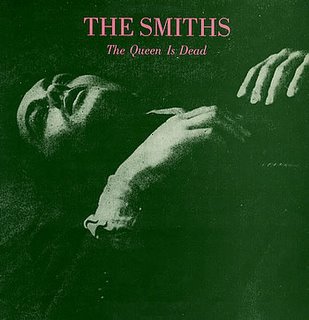 One of the greatest albums ever recorded* is now 20 years old. Although contractual disputes with Rough Trade delayed the actual release date of ‘The Queen Is Dead’ until June 1986, the recording sessions themselves began in December 1985.

It’s an album whose reputation has grown over the years: in its infinite wisdom, the NME only rated it as the 9th best album of 1986 (behind ‘Raisin’ Hell’ by Run DMC, ‘Bend Sinister’ by The Fall, ‘Graceland’ by Paul Simon, ‘Word Up’ by Cameo, ‘EVOL’ by Sonic Youth, ‘Control’ by Janet Jackson, ‘Rapture’ by Anita Baker and ‘Parade’ by Prince!). Now it’s an album that is more or less a fixture at the top end of those “Album of the Decade” type polls.

It’s a wonderful album… from the music hall opening, pounding drums and shimmering guitar of the title track, all the way through to the last notes of “Some Girls Are Bigger Than Others”. It has depth and variety, comedy and pathos, wit and wisdom…. it also contains probably my favourite song of all time: “There Is A Light That Never Goes Out”.

With all of this in mind, I found myself wondering this morning if its reputation will survive being named by the new leader of the Conservative Party as his favourite record of all time? What would Morrissey (the author of a little ditty entitled “Margaret on the Guillotine”) make of that?

First The Urban Fox is quoted in the Daily Telegraph, and now this. What’s going on?

* I imagine there may be some debate about this. For what it’s worth, I don’t even think it’s the best album by The Smiths.
Posted by swisslet at 14:18