I'll do graffiti if you sing to me in french 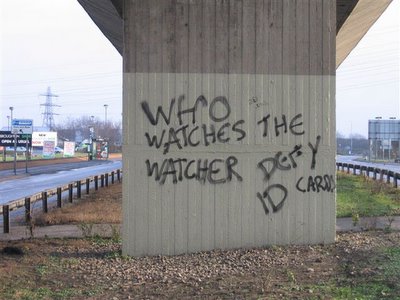 This fantastic statement is scrawled onto an otherwise totally unprepossessing bridge just around the corner from where I work in Nottingham. It's not every day that you drive past some graffiti that quotes (knowingly or otherwise) Juvenal's Satires ('Quis custodiet ipsos custodes').

I've no idea why they chose this spot to make their point, but I have to say I like it. I like the fact that hundreds, maybe thousands of commuters will drive past this every day on their way into work, and I like the thought that perhaps some of them will take the message on board.

I'm reminded of a stand-up routine that David Baddiel used to do when he was part of The Mary Whitehouse Experience (which, amongst other things, was the first programme to use the word "wanker" on broadcast TV in the UK, fact fans):

'M. KAHN IS BENT' was, until recently, painted in very large white letters on a railway bridge that crosses the North Circular road in London between Crouch End and East Finchley (Just by the gasworks).

It had been there for over ten years, unmissable by every single car travelling in a westward direction on the North Circular, which, bearing in mind that approximately 300,000 cars containing an average of 2.7 people pass under that bridge every day, would indicate that, over the course of time, the fact of M. Kahn's bent-ness may have been impressed on 2,956,500,000 people, or round about five times the population of Europe.

This kind of majority opinion must have made it very difficult for M. Kahn to dispute.

Many things, however, remain unexplained. Considering the scale of the insult, why did the man who painted it choose to use the polite form 'M. Kahn' - as if he was writing a letter to his bank manager? Perhaps he didn't know Mr Kahn's first name (Michael? Monty?), in which case he can't have known him very well - in which case it seems a bit much to go and paint definitive statements about his sexual orientation ten feet high on the North Circular.

And perhaps even more intriguing, why was M.Kahn himself (Morris? Matt?), no doubt a resident of the Finchley area and well able to contact the local borough council, content to leave the message there for over a decade? Is it possible that he wrote it himself? Which would suggest that the graffiti was not in fact an insult, but the biggest sex-advert in the world. Perhaps we'll never know.

Whatever it was that persuaded the council finally to paint over 'M. KAHN IS BENT', The Mary Whitehouse Experience is prepared to offer a large sum of money to any person or persons prepared to go back to the bridge, under cover of darkness, and paint on it the words 'M. KAHN IS STILL BENT'.

We must protect our civil liberties while we still have some to protect.

Speaking of which, I know that.... 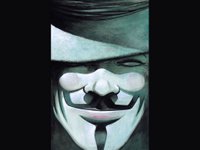