I should have seen it when my hope was new... 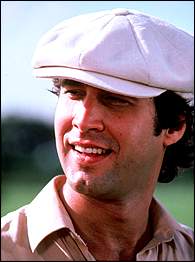 My long, slow descent into a white, middle-class middle-age began to pick up some speed this morning.... I went out and played a round of golf with a couple of friends. I enjoyed it too. It was cold, raining and I came last, but I plan on doing it again. As you might expect from someone who has only played a couple of times before, and who last picked up a golf club in anger about 18 months ago, I wasn't much good. But I only lost one ball and I hit a couple of good 5 irons, some decent pitches and a couple of useful putts.... and it felt really good.

It was only a 9 hole par 3 course, but I feel as though I have set something in motion. It won't be long before I'm out shopping for some plus-fours.

Caddyshack is on telly tonight too. Coincidence? I don't think so.
Posted by swisslet at 22:21