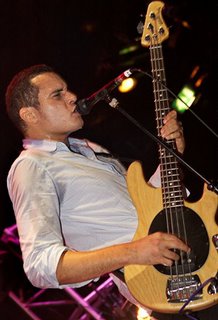 The last band that I saw in the basement bar of Rock City were a pre-'Gay Bar' but post-"Danger! High Voltage!" Electric Six, who were ace, obviously. The venue itself is a dingy little bar at the back of Rock City, and it probably holds a maximum of about 300 people. Dick Valentine had us eating out of the palm of his hand that night; when he stripped off his suit jacket and shirt to reveal a t-shirt emblazoned with the face of a Baywatch era Hoff and launched into "Radio GaGa", the room went ballistic. Ah - simpler times.

My expectations of Kubb were probably a little lower. Thanks to Lord B, I have a copy of their album ("Mother"). I think I would politely describe them as a slightly sappier version of Keane, with guitars. Lord B loves them, of course. I listened to the album a couple of times, thought they were okay, and consoled myself with the thought that a night at a bad gig is generally better than a night in front of the telly (and I've gone right off Desperate Housewives). The audience didn't exactly fill me with confidence either - it was a very odd mix of earnest looking young people and quite a few older people. I actually had to ask Lord B if he was sure that they weren't christian rockers. It was that kind of crowd.

The band shambled on a little apologetically and waved shyly to the crowd before kicking off into their first song. How would I describe them? Hmm. Well, put it this way: I reckon that the three of Keane could take the four of Kubb in a fight. There's not many other bands I reckon Keane could take in a brawl, but this is one of them. The singer looks like he could handle himself, and the drummer had chunky looking biceps, but the guitarist is tiny and the keyboardist wears glasses. They probably had their dinner money taken from them at school a lot, and I think it shows.

How were they? They started strongly, playing my favourite song of theirs first ("I Don't Mind"). Sadly this meant it was all downhill from there. They were okay. He's a decent singer, and the songs are alright... but they're quite quiet. It was a bit like being in a smokey church. Even the between-songs banter was conducted in a whisper, and this had the knock-on effect of dampening down the crowd reaction to a muted hush. After they finished a song and the initial applause had died down, there was an almost total silence before the next song started.

I started to get distracted by the people around me - never a good sign - and focused on the woman in front of me with no concept of body space who kept backing into me, the barman reading a book, the guy with stupid big hair like Simon Amstell from Popworld and a face like a smacked arse, the hunched up guy chain-smoking onto me, the people just behind me stood in a circle talking loudly to each other over the music.... the usual contenders for the coveted 'Twat at Gig' award (tie between body space woman and hair, if you're interested).

They finished the main part of the set with their two most famous songs - "Wicked Soul" and new single "Grow". Both got the crowd moving, but were probably most notable for the fact that when they attempted a crowd-singalong, the only voices to be heard from the crowd were female... Having mentioned earlier in their set the 'fact' that Nottingham is famous for having a ratio of 3 women to every man (so many bands mention this at Rock City that it must be pinned up in the dressing room somewhere), the band presumably thought that this was par for the course, rather than a reflection on the typical gender of their fanbase.

They nearly rescued it during the encore actually. They'd run out of songs to do, or at least they thought they had, when a member of the audience suggested one to them, which they played immediately. In spite of their protestations that they couldn't remember how it went, and how this was likely to be a shambles, they then followed this up with a more than decent cover of "Mother" by John Lennon.

The verdict? Alright, only alright.... but still better than a night in front of the telly.

On a completely unrelated note, I had a dream last night. I was at some big event and found myself escorting Heidi Klum though what looked like a giant empty marquee filled with dinner tables and chairs. I couldn't tell you what Heidi Klum looks like particularly, I just knew it was her. Someone else was with us too, but I didn't get a good look at them, and I'm not even sure what gender they were. The three of us walked through the deserted marquee until we came to a doctor who was working behind a counter. The doctor was the guy who played the friendly White House journalist who dated CJ in the West Wing. He looked at Heidi and asked her to take out her contact lenses. She didn't have her lens case, so I found a piece of cardboard, but a couple of drops of solution on, and she took her lenses out and popped them onto the cardboard. The doctor examines her eyes for a moment and concludes that she has an eye infection, although I don't remember if he wrote her out a prescription or gave her any drops. We seemed satisfied with this anyway, but as the three of us were starting to walk off, I turned to the doctor and mentioned that I had contact lenses in too. He just smiled cryptically at me and said, "I know, you have it too".

Pick the bones out of that.
Posted by swisslet at 23:39