Alecya and Spins have now displayed theirs, so having been the one who laid down the challenge in the first place, it would be rude not to get mine out. I know I've been displaying rather a lot of myself around here lately, but a promise is a promise after all. 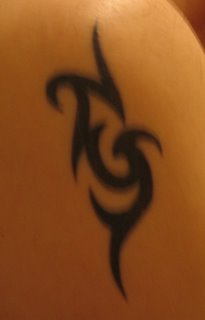 It's on my upper right arm (there's a wider shot of it here, and you can see it in situ here).

I had it done at a cool tattoo studio in Amsterdam when we were over there for Lord B's 30th Birthday a couple of years ago. C. knew it from when she was working over there, so once I'd decided to get one done, I waited until our next chance to go over and get it done. I knew roughly what I wanted to get done, but didn't have a specific design in mind. I flipped through their flash until I found this one, which I really liked. It didn't hurt much to get it done, and I had a good time chatting with the guys in there. It was an enormously positive experience, and I'd recommend it to anyone. I felt different from the moment the tattoo was complete. Not massively, but I definitely felt a little different, and I still do now.

I still haven't told my mum yet though. 31 years old and I hide it from my parents!

I'd have another one done too - a bear paw print - but I'm not sure where I'd have it done yet, and I'm not convinced I want it on the opposite arm. There's no rush though, and if I decide, I'll get it done the next time I'm in Amsterdam.
Posted by swisslet at 19:16