something blocks the line again...

I've just had some photos scanned in, and I thought I would share them with you. 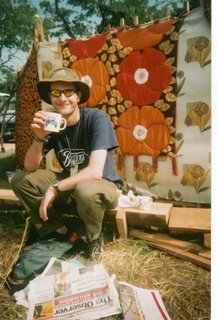 This was the day of the 2002 World Cup Final, which was screened at the Pyramid Stage after Rolf Harris had finished his set. As I recall, I got very drunk on cheap red wine and danced my heart out as the Germans were beaten. This was earlier though, and as is my Sunday tradition at Glastonbury, Rich and I had got up before everyone else and headed over to the wind-powered cafe in the Green Fields for a cup of Organic coffee, a muffin and a read of the paper. Heavenly. 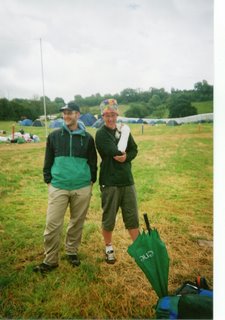 This was us packing up to go home on a drizzly monday morning. It's always a bittersweet kind of feeling. Obviously, the reason for including this picture is the hat. It was very cold at night that year. As a man for whom a cold head is something of an everyday hazard, I was well prepared for it. Lord B has rather more hair than me though, so he had to go and buy a hat. He went shopping on his own and came back with **that** hat.

He still has it, I believe. Isn't it lovely?

His arm? Oh, you'll have to ask him about it. All I'll tell you is that involved drunken dancing around a wine bar blasting out 80s classics when he was on the way back from watching Mystique. Yes I know I look like I'm just off for a round of golf. What of it? 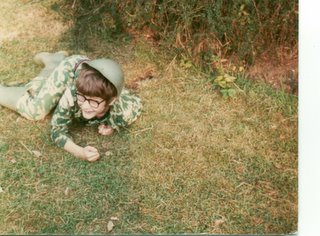 You might have seen this one before. This was me in September 1981, a few weeks before I was packed off to boarding school for the first time. One day playing soldiers in the garden, the next day being loaded into the car with a trunk and taken off to school. Everytime I look at this picture I can't believe how young I was. 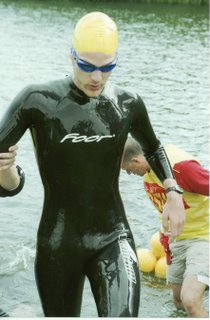 This was the swim where I nearly drowned, and I think you can see I look a little bit dazed as I'm helped out of the water. This was the last triathlon I did, actually - Emberton Park back in June. It was supposed to be my first proper practice in the wetsuit before the London Triathlon in August.... but of course, it wasn't to be. The photo was taken by the official photographer, and I've only just got round to ordering some copies before they deleted them. 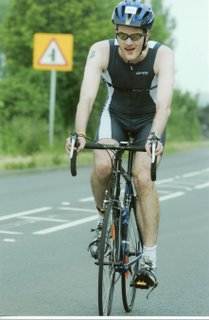 Straight out of the water and onto the 20km cycle. This was the first runout for my new bike, and it was pretty good. I actually overtook a few people - something that never happened when I was still using my mountain bike. 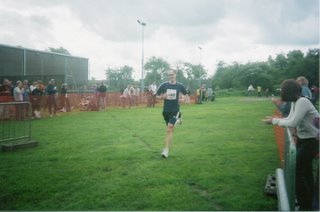 I don't actually have a picture of the run from Emberton Park, but this is me running into the finish at the Southwell Triathlon a couple of years ago. I cannot tell you how hard it is to pick your knees up and try to kick for a sprint finish. The brain is willing, but the legs just will not respond.... that's why you wear sunglasses really..... they hide my widly rolling eyes.

I'm not sure there's anything much else I can say after that, is there?
Posted by swisslet at 20:23