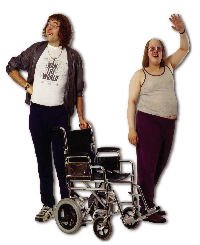 I'm off to Rock City with Lord B in a minute to go and enjoy the downbeat pleasures of the mighty Elbow ... but before I go, I've just got time to tell you about Little Britain.

I bought these tickets something like fourteen months ago (I think that's a personal best for anything apart from the Ryder Cup). That's a long time to wait for anything. It's probably just as well that I had more or less forgotten that we were going, as if I'd actually been really looking forward to this, then I think it might have been a crushing disappointment.

Most of the characters were present and correct, and the audience quickly got into the swing of cheering the catchphrases ("Yeah, I know", "yeah but no but yeah but...", "I'm a lady!", "I'm the only gay in the village", "Computer says no", "write the pheem choon, sing the pheem choon"..... and so on). And I chuckled along, but my heart wasn't really in it.

It was funny after a fashion, but I think that basically the characters lack any warmth or humanity, and it's all a bit clinical. I watched the "Fast Show" in the same venue a couple of years ago, and I thought they were excellent. On the face of it, it's a similar kind of show, with both being basically reliant upon the comedy of repeated catchphrases. With the Fast Show, the characters are portrayed with a lot more compassion; the comedy is less cruel. As a result I think it is more comfortable laughing along with them. Little Britain is a whole lot crueller, built as it is upon laughing at other people.

I did laugh when Dennis Waterman was carried off by a seagull though....

Right. Off to Elbow.