passing the gun from father to feckless son 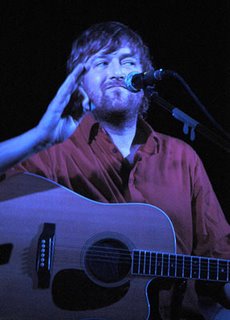 As I've already described elsewhere this week, I have a ludicrously short-attention span at gigs. I am really, really easy to distract. Sometimes it's the guy chatting to his mates just behind me; sometimes it's the people checking their phones every 2 minutes to see if they have a new text, or waving it at the stage trying to record/video/photograph the band; sometimes it's the person standing just a little too close to me; sometimes it's the tall guy who keeps moving so he is standing directly in front of me.... sometimes this tall person is Lord B.... Even my memories of some of the best concerts I have ever attended are softened around the edges by something peripheral that managed to draw my attention away from the band. You want to know the reason why I seem to be so stingy with my marks out of ten at gigs? More often than not it's the distraction factor.

For three songs, Elbow were brilliant. They came onto the stage, looked genuinely pleased to be there, and launched into 'Station Approach', 'Fallen Angel' and 'Red'. They're a great band. They remind me a little of a non-stadium friendly Coldplay - with a better and more inventive lyricist. They're very downbeat and slightly melancholy, but they have a wonderful knack with a tune, and given the right moment, can be wonderfully uplifting. They deserve to be massive, but I would be very surprised if that ever really happens. Rock City was quite a long way from being sold out tonight. Lord B has been carping a little all day about not being in the mood for seeing a miserable indie band, and I think partly because of that moaning, I've been really looking forward to seeing them play all day, and I was delighted to be so captivated by their opening gambit. Then they played a quieter one, and the crowd started to chat, to head to the bar, to make a move to the toilet.... and the moment was gone. It wasn't really recaptured for me until right at the end of the set when we got to hear songs like 'Newborn', 'Powder Blue', 'Puncture Repair' and 'Forget Myself'.

There are lots of different ways of working your way though a crowd. My own preferred technique is to lay a gentle hand on someone's shoulder to let them know I'm there, make eye-contact with them as they turn, and then sidle past. The favoured technique at Rock City this evening was the shove, sometime accompanied by the poke. I know that some movement at a gig is inevitable, but do we really have to be so rude about it? I also think it's pretty rude to stop on your way through the crowd, turn back to the mate who is following you and to start chatting to him - all in the middle of a song.

Interruptions in the quieter songs aside, I thought Elbow were really good tonight. Guy Garvey has a nice easy way with a crowd, managing to engage us in a little bit of banter, including a small monologue about how brocolli is a man-made vegetable, whereas chips come from potatoes, which come from the ground. He also quite likes introducing songs with a phrases like "this next song is... great" but he manages to do it without sounding conceited too.

It was the band's first show since Christmas, but if they were at all rusty, it didn't show. As Garvey put it at the end: "This isn't a very difficult job, but you made it fucking easy". The pleasure (crowd distractions aside), was all mine, and I've come home wanting to listen to "Asleep In The Back", and you can't really say fairer than that.