When you lose control and you got no soul 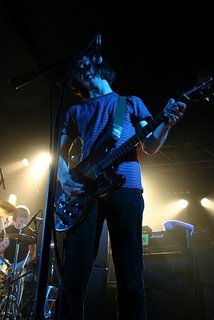 I think it's been a pretty long time since I went to a gig where I have never to my knowledge heard a note by the headliners. Nine Black Alps then..... We were late for probably the most un-rock'n'roll reason ever -- we had been watching a gripping game of curling between Denmark and Canada -- but arrived to find The Kids were out in force. To be honest, I'm never really sure if is a good sign or not, but it did mean that there was plenty of experimental facial hair, lots of first-time drinkers and just a touch of tentative snogging going on. Nice.

Shame the band were shit.

Well, maybe shit is a bit harsh, but they weren't great. I gave them the benefit of the doubt for a couple of songs. They were quite noisy and shouty, but it was the kind of stuff that you could tap your foot to, and The Kid's were rocking. After a couple of songs though, I began to concentrate on who they reminded me of: Nirvana, Pearl Jam, a touch of The Offspring perhaps.... I think the singer hopes he sounds like Kurt Cobain, but to be honest he reminded me a little of Graham Coxon and quite a lot of Jilted John. Bizarrely, one song appeared to steal the melody from "Tragedy" by the BeeGees, and that's what I was singing in the car park. That can't be good, can it? Go to a gig by a rock band and come out earworming 1970s disco.

Apparently the NME says they are the next big things.

They weren't really terrible, and both the band and The Kids looked like they had a decent time. I just thought that basically they were shouty nonsense.

Still, a night at a mediocre gig is better than a night in front of the telly, right? And it was only a tenner.