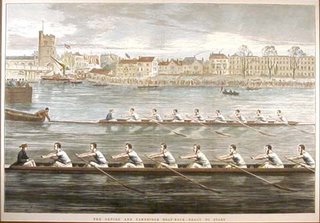 From one British institution to another. At 16:35pm on Sunday afternoon, the crews will be lining up on the river Thames for the start of the 152nd Boat Race between Oxford and Cambridge Universities. There will be one cox and 8 oarsmen in each boat (coincidentally including Paul Daniels... not the same one, I'm guessing), around 250,000 spectators crammed along the river banks between Putney and Mortlake, and a television audience estimated to be around half a billion people. Let's not get into the debate about what constitutes a billion again - let's just agree that it's a hell of a lot of people to be watching an amateur race.

This is an event with quite a history: the first one took place in 1829, and it has taken place every year since 1856 (except during the First and Second World Wars). That's older than many nations. You might also be interested to know that, amongst the many other famous names to have taken part in the race, Hugh Laurie - Dr House himself - rowed for Cambridge in the 1980 race.

Do I like it? No. I think it's overrated, over-publicised and overhyped and I despise it. Don't get me wrong... I think it's an incredible physical achievement to row 4 miles and 374 yards, and you only have to look at the crews at the end of the race to understand how much effort they put into it.... It's just I hate everything around it. It's not that I don't like rowing either: I was present when the British Men's coxless four won the gold medal at the 2004 Olympic Games in Athens and it was one of the greatest sporting events I have ever been lucky enough to see. You wouldn't catch me dead at the boatrace though. There's something about the people that do go (and I know that this is a massive generalisation) that really sets my teeth on edge. Hooray Henrys with lots of champagne and little or no interest in sport. You also see them at Twickenham for the rugby and at Lords for the cricket, but somehow it's at the boatrace that it bothers me the most. I also totally fail to understand why millions of people with no connection with either Oxford or Cambridge will happily sit and watch it, or why the coverage of a race that lasts about twenty minutes needs coverage lasting several hours.

I was going to make a point about how the majority of the crews will be foreign international rowers "studying" a variety of dubious one year courses but actually imported especially to row in this race ... but then I saw that Thomas Edwards - the Cambridge President - is studying for a PhD in Medical Genetics, focusing on the role of intercellular membrane trafficking in motor neuron degeneration.... so maybe I'll keep that particular thought to myself.

Still. I don't like it, I don't care who wins and I won't be watching it. So there.

If you like it.... enjoy..... and perhaps you'd care to explain the attraction, and who you'll be cheering for and why.
Posted by swisslet at 20:55