one golden glance of what should be... 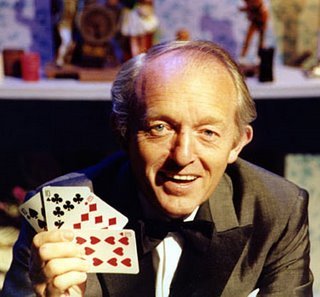 You can stop your sniggering right now - Paul Daniels can probably lay claim to being the most successful TV magician of the Twentieth Century. He's a very different breed of magician to the ones we see on TV now. I don't think you'd catch Paul Daniels hanging in a box doing nothing for several weeks, nor do I think you would find him sticking his head in a tiger's mouth or 'flying' across his audience. Nope. Paul Daniels' stock in trade is far less showy but just as impressive in it's own way: sleight of hand, card tricks, illusions and the like, all delivered with the little man's unique brand of humour. You're going to like this.... not a lot.... but you'll like it.

In 1983 he was named "Magician of the Year" by the Hollywood Academy of the Magical Arts - the first person from outside of the USA to receive the award. In 1985 he won the Golden Rose of Montreaux for the "Paul Daniels Easter Magic Show". His TV shows have been screened in 47 countries...

And he's got a blog.

This was pointed out to me by the lovely Yoko (she insists that she doesn't go looking for these, but coming hard on the heels of her MC Hammer recommendation, I'm not sure I believe her....) In many ways he's a throwback to a more innocent age, but there's no shame in that. I grew up watching this guy on TV, and after spending a bit of time reading this, I felt moved to drop the man an email. I wrote to tell him how much I was enjoying his blog, and how much I used to enjoy watching his shows on TV. I told him how one trick in particular had stuck in my mind when he appeared to eat a goldfish. It was brilliant, and was made even better and more memorable when he broke the rules of the Magic Circle to reveal to us how the trick was done, thereby saving the lives of many thousands of innocent fish.

About ten minutes later he emailed me back!

I MUST try to get up to date tonight cos I go away tomorrow.

Silly things like work keep getting in the way!

He's an absolute legend, and this blog salutes him.

Besides, how could you not love a man who lists the following in his profile:

"Dislikes: Inefficiency, Idleness,"centre lane drivers", War, Violence and Murder especially when they come in the name of religion. Turning down charity and Party invitations but Due to the amount of work it leaves little family time."

Blog of the Week.

[Previous blogs of the week: Delrico Bandito, I have ordinary addictions, Girl With A One-Track Mind, Ditch Monkey, Skinny Legs and All, Wandering Scribe, Sarah, MC Hammer, Lisa Whiteman]
Posted by swisslet at 21:15