the morning rain clouds up my window 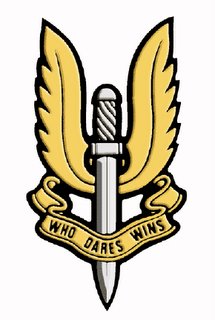 I have to admit that I was amused when I read that the British Army has got the hump because Norman Kember apparently neglected to thank them for rescuing him. Kember is a 74 year old peace campaigner who had been held captive with some of his colleagues for the last four months and who was freed by a multinational force including the SAS last Thursday.

The head of the British army, General Sir Mike Jackson said that he was “saddened that there doesn’t seem to have been a note of gratitude for the soldiers who risked their lives to save those lives”.

Whilst it's true that a simple 'thank you' would only have been polite (if indeed Kember didn't offer one), I wasn't aware that one was required. I wonder how many other hostages have been left chained to radiators by over-sensitive special forces troopers simply because they didn't say the magic word.

Maybe the British army have just grown accustomed to having Iraqi civilians falling over themselves to thank them for all their excellent work in bringing peace and prosperity to their troubled nation....
Posted by swisslet at 20:58