Another day in June, we’ll pick eleven for football 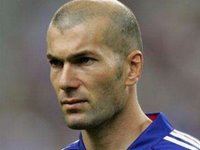 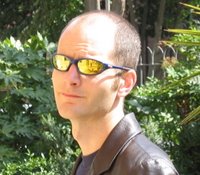 Zinedine Zidane is one of the greatest footballers ever to grace the game. He has won the World Cup and the European Championship with France. He has been the FIFA World Player of the Year on three separate occasions and has won the Ballon D'Or as European Footballer of the Year. He is one of the most cultured ball-players there has ever been. He is a magician. He is a ballet dancer. He is mesmerising.

My football career has been a little less glittering. I played a bit at school, but we mainly played rugby. I played a bit of sunday league football at University, but we were a hopeless side and I was a defender who never headed the ball. I play 5-a-side football most weeks, and although I score the odd goal, I would never be so bold as to suggest that I have any talent - I have very little. I run around a lot, but achieve very little.

And yet I have been compared to Zidane.

This has happened a few times now, but the first time was by far and away the most memorable: Zidane transferred from Juventus to Real Madrid in 2001 for a then world record transfer fee of £47m. In the September of that year, C and I spent a few days in Madrid and were lucky enough to take in a game at the Santiago Bernabeu, where Real were playing Malaga. I have always admired Zidane as a player, and was very much looking forward to seeing him playing in the flesh. Before the game, I paid a visit to the stadium's ridiculously small club shop and bought myself a replica shirt with Zidane's name and number on the back. I put the shirt on immediately. Killing time before the game, we wandered around the supermarket underneath the main stadium looking to pick up a couple of bottles of water. As we were wandering around the aisles, I was accosted by some excited looking spaniards who were convinced that I actually was Zidane. Quite why they thought that Zizou would be wandering around a supermarket in his club strip on the evening of a game is beyond me -- I'm guessing that Real Madrid provide their players with water before a game -- but I was quite happy to take the compliment.

I mention this because over the last couple of weeks, I have been taking part in an 11-a-side football tournament. One of the guys I play 5-a-side football with is emigrating to Australia in the summer. Before he departs, he has organised a mini-tournament between the 4 teams he has played for since he moved to Nottingham, including my Thursday night 5-a-side team, with all the profits from the games being donated to Amnesty International. We're a social side, and most of us haven't played 11-a-side football in years (in my case, about 10 years), so we're pretty hopeless... but it hardly matters.

We've been playing in white shirts, and so I've been wearing my long-sleeved Real Madrid shirt. It's not the same shirt as I bought in September 2001, but it still has Zidane's name and number on it...... because most of the people I've been playing against have no idea who I am, they have been identifying me as Zidane. I therefore spend every game floating around being addressed as though I was one of the greatest players in the world. They shout out that someone should "mark Zidane" and they're talking about me! It's brilliant.

Some of my own side have started calling me Zidane too. "Oi. Zidane. Get to right back and head the fu*@ing ball!"

I bet the great man hears the same thing most games as well.

....and coincidentally we also seem to have a similar haircut.
Posted by swisslet at 22:16