it's a very dangerous thing to do exactly what you want 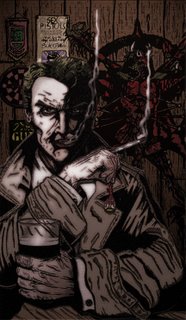 Re-reading V for Vendetta and watching the film has whetted my appetite again for good graphic novels. I've just been reading "Hellblazer: Original Sins", a collection of the first nine stories that introduced the occultist John Constantine to the world (well, he originally appeared in "Swamp Thing", but this was his solo debut).

Yes. It is the same John Constantine as the one in the film 'Constantine' starring Keanu Reeves. 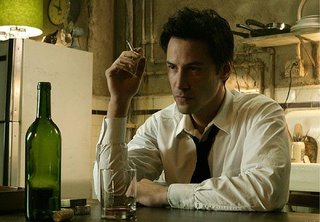 I'm sure the hardcore fanboys did their nuts and went ballistic on the message boards when they heard that Keanu was being cast as their hero - in the comics he is a blonde-haired Liverpudlian, not dark-haired and Californian. I watched the film a couple of months ago and thought it was pretty good, to be honest. I suppose I was expecting it to be trash, and it was... but it was very entertaining and sylishly presented trash. Keanu is really good at this kind of thing - as long as you're not asked to believe that he is any kind of a great brain, he can be a very charismatic leading man.

The comics are inevitably a bit different, but the core of the character is the same: Constantine is a hard-drinking, hard-smoking maverick who walks the line between the forces of heaven and the forces of hell.

God. Just listen to me. I'm 32 years old and I'm talking about the last comic I read.

Mind you, V for Vendetta and Watchmen are at least as good as any of the books I have read recently, and I have been keen for a while now to to explore further. Luckily, in Page 45, Nottingham is blessed with a really outstanding comic shop, so I've been doing a little bit of shopping. On a recommendation from Stef, I have been reading the first couple of volumes in the Preacher and the 100 Bullets series, as well as finally pulling my finger out and picking up the first volume of Neil Gaiman's Sandman.

This is all high-brow literature compared to what I'm planning to read next though..... I'm going to read the Da Vinci Code. I've been avoiding it mainly because it hasn't appealed to me at all. I studied Medieval and Early Modern History at university, so I'm fairly well versed in the art, religion and literature of the period and I've always assumed that this will be silly, inaccurate nonsense. I'm sure it is, but C. read it, enjoyed it and will definitely want to go and see the film. As I always like to have read the original book before I go and see an adaptation, I'll pick it up and see what all the fuss is about. We're also going to Paris next month, and I intend to spend some time in the Louvre.... I've never been before, so it'll be nice to have a look at the Mona Lisa and see if the old girl ranks anywhere on my list of favourite paintings that I have seen with my own eyes. At the moment my 2 favourites are: Las Meninas by Diego Velasquez and The Birth of Venus by Botticelli. Both are paintings I was stunned by when I first saw them. The Mona Lisa is more famous, but if she captivates me half as long, she'll be doing pretty well. For further reference, my all time favourite work of art of all time is Michelangelo's Pietà. Stunning. (I also quite like the work of the other Ninja Turtles, but Michelangelo is my favourite)

From comic books to Renaissance sculpture via the Da Vinci Code. Ah, the wonder of blogging.

Whilst we're talking about this kind of thing, and in response to something Alecya asked over at her place, my current all time favourite top 5 books of all time* are (in no particular order):

Special mentions too for "The Encyclopaedia of Things that Never Were" which my mum and dad gave me in 1985 and I still treasure, and to Philip Pullman's "His Dark Materials" trilogy, which is probably the last book I read that made me cry.

Nope. I've no idea how this one crept in. I pretty much hate Abba, but there I was - sitting in the office and definitely singing this one loud enough for Claire to pick me up on it from the opposite desk. Ooops. Busted.

This is of course the theme to "Malcolm in the Middle". I caught a few episodes of this last week and marvelled both at how brilliant it was and at how much older the kids were looking. Mind you. Wouldn't Bart Simpson be 27 or something by now?

Big, dumb singalong. It was ace before, but when they used it straight after the end of the England vs Germany World Cup Qualifier in Munich in 2002, it was a real shivers-down-the-spine moment. "I think we're going to make it....".

This is the last song on their first album, and as such it's a bit of a hidden gem. They played this towards the end of their set when I saw then live last year, and I was reminded of this when I saw a recording of their Edinburgh gig on E4 Music this morning. Good band,

From "Analogue", their most recent - and really very good - album. He's still absurdly good-looking too. Bastard.

This came on when I was in Fopp last weekend when I was browsing their DVDs and deciding if I wanted to buy the Mighty Boosh box set. It's big dumb rock and as such is genius.

Much more than just a pretty face. "Quelq'un m'a dit" is an excellent album and this is a marvellous song (see me with my superlatives!). If you doubted the lyrical abilities of a supermodel, then check out the wit and dexterity that she uses with these 50 rhyming couplets.

The single has been earworming me like mad over the last couple of weeks, but this is my favourite track on the album so far. It's a song about Mike Skinner's late father and as such is quite touching. It's very much a successor to "Dry Your Eyes" and so will obviously be released as a single. The album itself I am distinctly unsure about, but will give it the benefit of the doubt until I go to see him next month at Rock City.... perhaps it will all make sense live.

"If you could make everybody poor just so you could be rich, would you do it?"

A song questioning the corrupting influence of absolute power set to an insanely catchy tune. When Bono and Chris Martin talk about this kind of thing, they always sound preachy. The Flaming Lips just sound like they're having fun. You're a lot less likely to see U2 or Coldplay prancing around with giant furry animals onstage either - more's the pity.

"With all your power
What would you do?"
Posted by swisslet at 18:04