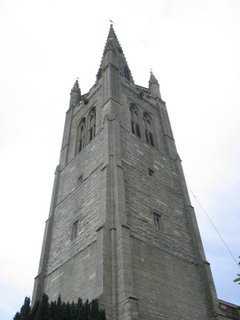 St James the Great is the parish church in the village of xxxxxxx [removed due to excessive googling, not that I'm shy, but still..... I didn't think this one through] in Buckinghamshire. Some of the building is pretty old - the Chancel dates back to about 1160 and a little plaque on the wall in the nave lists every vicar to have served in the church in an unbroken line since about 1260. Undoubtedly the most impressive feature of the church though is its steeple: it is about 100ft high and dominates the skyline for miles around. Apparently it used to be about 4 foot taller, but was struck by lightning at some point (hardly surprising) and shrank.

It's also my mum and dad's local church. When I was growing up, I didn't spend much time here. In large part this was because I went to a boarding school and simply wasn't at home often enough. The fact that we didn't go much when I was at home was mainly down to the fact that my dad had a running feud with the vicar. For many years my dad was xxxxxxxxx [sorry... random googlers again], and for some reason he never, ever saw eye to eye with the vicar, and so either didn't go to church, or went to a different church. He's always been a bit of a closet bible thumper though, and when the last vicar finally moved on (after 25 years!), he's embraced the new regime with great enthusiasm, and is now a pillar of the church-going community.

I think it's a mild regret of his that I turned out to be a heathen. We had a great argument this weekend actually - dad made the mistake of saying that it was a fact that Jesus was a historical figure. For a historian, that's like a red rag to a bull, so we had a bit of a set-to over that. Oh, and also over his assertion that the gospels were good eye-witness accounts, in spite of the fact that he freely admitted he believed they were written more than 40 years after the events they described... which he compared to him writing about the Coronation of Elizabeth II in 1953. He thought that would still be a pretty accurate account.

Like every church, they are having a fundraiser: something that all the worthies of the local community can get behind and bake cakes, put up bouncy castles and have a fete or something. In xxxxxxx this is all being done to raise the money to buy a new church organ.

So how else would you spend your May Day bank holiday other than by abseiling down the church tower in aid of the organ fund? 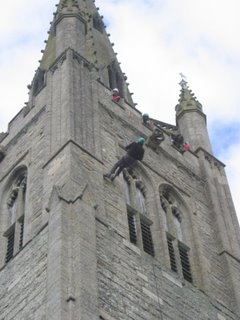 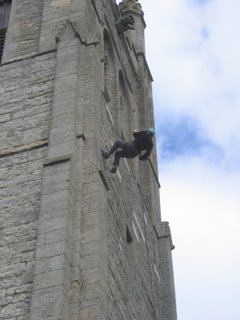 Me? I watched a bit of snooker, read the paper, thought about reading a bit more of the "Da Vinci Code" (but didn't), took the dog for a long walk, tickled the cat, visited my brother who has just had back surgery, sampled the delicious homemade pie made by the new landlady at the Village pub (yes, and the beer).... and generally lazed around. That's what bank holidays are supposed to be about, isn't it? I didn't feel the need to abseil off anything.... I was quite happy on the ground, thank you very much. 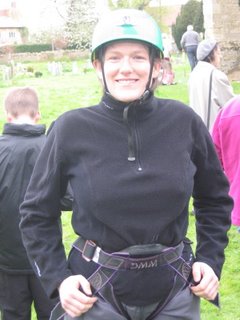 C. is made of rather different stuff though, and so this afternoon she gracefully danced her way down the sheer face of the church steeple, making light of the high winds.... and in doing so earned the respect of the ladies on the cake stall and raised a bit of cash for the church organ fund.

For the record, I don't think much of the new vicar. Should I start a new feud and perhaps make it a family tradition? Just for the hell of it?
Posted by swisslet at 21:04