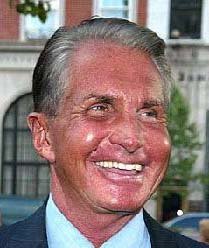 I have to say that I've never really been that interested in getting a tan. Partly this is because I find sunbathing to be one of the most tedious activities on Earth and partly this is because I'm not in the least bit bothered by the way it looks. Oh, and apparently it's also extremely bad for you. Tanned skin is damaged skin, you know. Not surprisingly then, I find the whole trend for tanning a little bit baffling. It's incredibly narcissistic, isn't it? I've never really understood why, in their quest for the all-year tan, people will willingly go to a salon and submit themselves to damaging ultra-violet light, or why they will sit for hours slow roasting on a beach. Boring.

For me, pale is interesting (although, to be fair, I have a skin tone that could optimistically be called "olive", but would more accurately be described as "yellow", and with my hairline, it's always wisest to wear a hat in the summer months.....). Rightly or wrongly, there is a part of me that sees someone with a tan and thinks that they are preeningly vain (more so when I see a tanned guy than when I see a tanned girl, for some reason. I'm sure there must be some exceptions, but in my head, I always reckon that a man with a glowing tan is also likely to have a highlighted mullet and overly plucked eyebrows .... and probably likes the music of Westlife, Simply Red and Phil Collins. That's got to be true though, right?).

Until today, I knew very little about the mechanics of how you go about getting a serious tan, and I cared even less....... and then I had a conversation with Claire, the girl who sits opposite me at work. Claire likes a bit of sun, has just got back from a week in Portugal and is as brown as a nut and keen to stay that way.

The conversation started harmlessly enough: we had a bit of a chat about her holiday... but then, before I could blink, we seemed to be talking about sunbathing and how it is important to make sure you get "an all over tan". What this means --- I know this now --- is that you have to:

(a) get naked
(b) make sure that you frequently change the position of your body so that everywhere catches the sun.

Let's think about that for a moment.

Between the toes? Yes. Apparently that's important when you wear open-toed shoes.
Under the arms? Very, very important in a season with so many sleeveless tops. Don't forget the backs of your arms either.
Underneath the breasts? Obviously. This may entail a bit of strategic lifting and shifting.

1) Does this mean that you have to adopt a "cheeks apart" position? (Yes)

2) Why on earth would you need to make sure you tanned *there*? Who would get to see in there? Who would care?

The answer to the second question is a bit crude, but I'm afraid there's no getting away from it. It is (of course) important to make sure you have an even tan between the cheeks of the arse just in case you end up having sex with someone and they are, um, entering you from behind.