privately divided by a world so undecided... 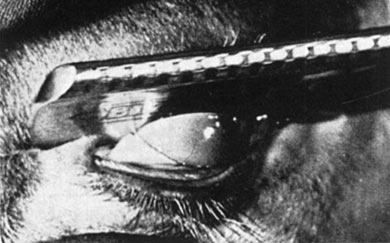 It has been my dubious pleasure this week to play host to some kind of unpleasant eye infection. You know that feeling you get when your eyes start to feel a bit hot and begin to get a bit gunky? I woke up with that very feeling a few days ago. I wear contact lenses, so I'm no stranger to this and I knew the drill. I got myself down to the pharmacy and got myself some medicated eye-drops. When this didn't clear it up, I made an appointment to go and see the doctor on Thursday. Ah yes. Conjunctivitis. Here are some eye drops. Should clear up in a couple of days.

24 hours later and my right eye is so bloodshot it looks like I have been punched, and it is becoming extremely painful to look around. Hmmm. Not good. Call to the doctor. Is it normal for the eye to get a lot worse before it gets better? No?

"I'd better start you on some different antibiotics, and if it gets any worse over the weekend or begins to affect your vision, go directly to Casualty. I'll have a new prescription ready for you to pick up this afternoon."

Excellent. I tootle off to the surgery, pick up the new prescription and head off to the pharmacy to have it dispensed. My eye is hurting like a bastard by this point, so I head back to my car intending to dose myself up before I head back into work. Hold on.... I was kind of expecting this ointment to have one of those long tapering nozzles - you know, the kind that make it a whole lot easier to apply to your eye. This one has got a standard flat nozzle. Closer inspection reveals a sticker on the side saying "EXTERNAL USE ONLY. DO NOT APPLY TO THE EYE".

Off back to the pharmacist I go, who immediately holds the prescription and tells me to come back later once she has checked with the doctor. Several hours later I go back, and yes.... the prescription has been changed.

The patient information leaflet helpfully told me that "your eye might sting after using the drops". After inserting them and then spending the next couple of minutes dancing around the room swearing, I can confirm that this is indeed the case.....

"Slicing up eyeballs...." do I need to explain any further?

"Final Straw" was definitely my most played album of 2004, and over the course of the year I saw the band no less than 4 times. During that last show at Birmingham Academy though, the lack of new material was becoming a bit glaring.... this was the 4th time I had listened to basically the same set list, and good though they were, they were beginning to flog the album a touch (they were also about to release the umpteenth single from it...).

I wondered a little bit what would happen with the new album. The first two albums were a bit underwhelming, so it was only natural to wonder if "Final Straw" had been a fluke. Well, after a couple of listens, "Eyes Open" sounds pretty good to me. Lots of emotional singing and some big choruses... but with just about enough of an alternative edge to get away with it. This song in particular grabs me. Big, sweeping, epic, tearful.... it's nice to have them back.

It's not a happy song. But then, Leonard Cohen isn't exactly the life and soul of the party is he?

Thanks to Mark for this one.

This one has been getting a bit of radio play and is quite pithy and tuneful. Obviously, as it's a female singer-songwriter, Bargs is hooked... and has been good enough to lend me the CD... hence its appearance here.

'If love is a drug, then I guess we're all sober'

I saw this lot on the "Album Chart Show". Bad hat. Bad eyebrows. Fantastic record. Reminds me of "Sleep" by Marion, for some reason.

5. "Vicinity of Obscenity" - System of a Down

Walker's new album finally came out this week, but I haven't got round to buying it yet. Perhaps I shouldn't be too surprised that this one has crept into my head. It's taken from his last album (1994s "Tilt") and is about the least bonkers song on there. That's a relative term though.

Nope. Me neither. It's hardly a conventional song at all, but he's a hero of mine and it's stayed with me for the last 11 years, so it's in....

This is one of the records that I instantly loved.... I think it must have been used as a backing track to something, because as soon as I heard it on the album, I knew it. Maybe I've simply absorbed it through a process of musical osmosis?

I'm very much looking forward to seeing these chaps live in November though.

Clocking in at a little over two hours long, "Stadium Arcadium" is more than twice the length of their next longest album. It's an awful lot to take in, and I haven't been able to process it all in a single sitting and have been listening to it in dribs and drabs all week. My first thoughts are that the second disc ("Mars") is better than the first ("Jupiter"), but that this is my favourite song by a country mile. Rhythmic, melodic and with a killer chorus. Takes the blissful brilliance of " The Zephyr Song" from their last album and takes you even higher.