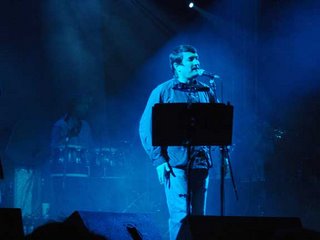 You may not be aware of this, but Derby is strangely adjacent to Nottingham. I say ‘strangely’ because I have lived in Nottingham for many years and I have never once set foot in Derby for social reasons, even though I used to live about ten minutes away from the Derby park-and-ride bus service. I’ve been there with work once or twice, but otherwise I have never particularly felt the need. That all changed last night when I made my way to the Derby Assembly Rooms to watch the Beautiful South in the company of the delightful C. and the delovely Lord B.

I suspect I may be fairly typical of many people who like the Beautiful South: I’ve got the greatest hits album and I think they’re a decent band, but that’s about it. Well. Actually I may well have copies of both of their greatest hits albums, because the newer one featured some essential tracks – this being a purchase predating iTunes. If I looked hard enough, I think I might also find that copy of their debut album that I picked up for buttons at some point and probably haven’t even listened to. Before yesterday, I’d never paid to go and see them live. I’d stood outside the acoustic tent at Glastonbury whilst they were on and wondered if the bars were still open, but I wouldn’t say that I’d really paid them very much attention. In summary then: the Beautiful South are decent band with some decent songs, but they’re certainly not amongst my favourites. I don’t even have any on my iPod. I love them so much that I haven’t bothered to even rip their greatest hits.

Are they really anybody’s favourites, do you think? 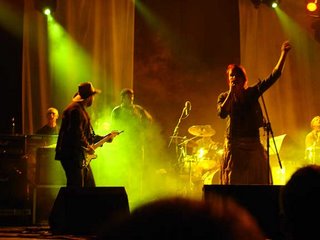 But the thing is, they’ve got the songs haven’t they? Together they have written some of the smartest, wryest, funniest songs to have made it into the charts in the last twenty years: Song for Whoever, Good as Gold (Stupid as Mud), Don’t Marry Her, A Little Time, Perfect 10, 36D, We Are Each Other, Old Red Eyes Is Back…. They’ve got a string of really good songs.

And tonight it felt like they played them all.

Oh sure, somewhere along the line they managed to squeeze in 5 or 6 from their new album (“Superbi”), but they were well mixed in and sounded just fine (current single “Manchester” sounded especially good). The band looked pleased to be there and they looked like they really got a kick out of playing their way through their back catalogue – which is more than can be said for a lot of bands. They had a proper horn section and everything! They sounded great.

They were fantastic fun, and I didn’t even let the fact that I’m currently coughing and hacking my way through a chest infection spoil it for me (although it did possibly ruin the night of anyone standing within ten feet of me… especially if they find they’ve caught it off me). Nor did I get too distracted by the fact that I was stood directly behind a six foot four inch woman with no sense of rhythm and a worrying tendency to sway wildly out of time with the music whilst wielding a meaty looking bag on her shoulder in the general direction of my chin…

Without doubt the most entertaining gig I have been to in a long time.

no blog of the week tonight. I hope you're not too upset. I might do it tomorrow, or I might just pass it up until next week. We'll see how it goes.
Posted by swisslet at 18:20