let's put our classics on and we'll have a little dance shall we? 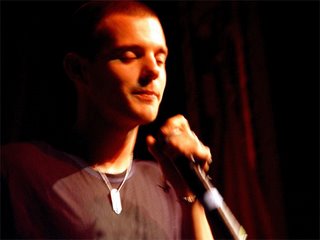 Look. There's no way of saying this without sounding like a snob, so I'm just going to come right out with it: if the gigs I go to at Rock City are usually attended by students, indie kids and graduates, then this gig was filled with plumbers, electricians and other white van drivers. There's nothing wrong with this - it's just the way it was. I didn't actually see any Burberry, but as Mike Skinner sang early on, in homage to the Arctic Monkeys, "I bet your underwear looks good in bed" (burberry underwear matching burberry sheets?). Actually, Skinner has a whole lot in common with the Arctic Monkeys... both have a real ear for the way that people actually speak and a gift for expressing it in song.

I'm not at all convinced by Skinner's latest album ("The Hardest Way to Make an Easy Living"), but there's no denying that The Steets are a fantastic live act. I've seen him once before - at "One Live in Nottingham" in 2002, and he was excellent... far exceeding my expectations. Since then he's had two hugely successful albums, a number one single with "Dry Your Eyes", and has apparently had a liaison with a crack-smoking pop star (as documented in "When You Wasn't Famous")...He might be richer and more famous, but little else as changed, and he still knows how to put on a good show: handing out the brandy and encouraging the girls to tell him if they're single (and in one case, chastising a girl for whipping her top off during one of the slower songs and putting him off).

Perhaps a little surprisingly the set consisted mainly of songs taken from his debut album ("Original Pirate Material"), with only a couple of songs taken from "A Grand Don't Come For Free" and a handful from his new album. Perhaps this tells us all we need to know about what he really thinks of his new material, but to be honest, I don't care. It's a great set, and he really gets the crowd pumping. His schtick with his co-vocalist, Leo the Lion, is well practiced and works extremely well (although of the two, Leo looks a hell of a lot better in those pastel linen jackets...).

I know a lot of people think that Mike Skinner sounds like little more than a GCSE music project, but I reckon he's got some real talent. His current album might be a bit underwhelming, but I reckon that he's always displayed a wit and intelligence in his music that may not always be apparent in some of his audience..... but like it or lump it, he's here for the long haul. He's certainly much more than the simple chav he might appear to be to the casual observer.

8/10... good stuff (with half a mark deducted for the guy with the mullet and the vest standing just in front of me...)