I guess the carpet weren't rolled out... 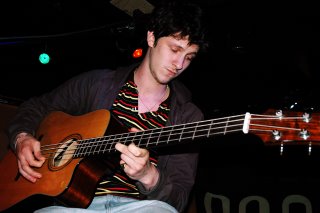 The comparison is obvious and you'll hear it repeated a thousand times by a thousand different journalists: Jamie T is a bit like The Streets, only perhaps a bit more chavvy. It's an easy link to make and it's not hard to see where it comes from. Jamie T is a bit rough and ready, he's pale, he's pasty, he wears hoodies and he sings songs about drinking Stella.

It's an easy comparison, but I think it's misleading. Jamie T takes to the stage tonight all by himself, sits down with an acoustic bass guitar and starts to play almost before the crowd has noticed he's there. He sounds amazing. I've never seen someone using an acoustic bass in quite that way before, and it works really well. He looks and sounds nothing like him, but he definitely reminds me a little of Billy Bragg. Three songs later and the ghost of the Bard of Barking disappears as the bass is replaced by an electric guitar, and the rest of the band take to the stage. It quickly becomes apparent that they are both an extremely tight unit, and also one that has listened to an awful lot of Clash records. That combination of choppy guitars and loose limbed reggae bass is unmistakeable: it's "(White Man) In Hammersmith Palais" all over again, only it's not, it's a song called "NWA". It's good, but it's a touch retro to say the least. The band have very clear reggae/punk influences, but - to be fair - the rest of the set isn't quite so obviously derivative (well, except for that song that sounded just like The Libertines sounding like The Clash) . Don't get me wrong though - the band are really good....it's just that Jamie T's appeal goes way beyond the backing music going on around him, and he's quite possibly a one-off. He has both a very distinctive vocal style and a very original voice. I'm sure it won't be long before he's following that man Mike Skinner into the charts. "Sheila" is out on 2nd July, and has already been picked up by Radio One (it's currently Zane Lowe's 'hottest record in the world' and Jo Whiley's 'record of the week'). If you get the chance to see him in a small venue, take it. He won't be playing them for very much longer.

The Social is certainly a small venue, and tonight it seems to be packed out with the youth of Nottingham. Not chavs. They're defintely not chavs - in fact they are pretty much your archetypal middle-class indie kids, just growing their hair into untidy afros and wearing jackets with lots of button badges. They are all unbelievably young: as well as asking for an email address, the sign-up sheet for the mailing list asks for your age. As I sign up, I see that I am ten years older than anyone else on the list. I'm so down with the kids.

The last band I saw here also owed something of a debt to the music of the 1970s, although The Feeling's love of 10CC is probably where the comparison ends. At the time, I thought that The Feeling had one knockout song ("Sewn") and a pile of other material that rather suffered in its shadow. I only knew "Sheila" coming into tonight's gig, but found that it was a long way from being the most impressive song that Jamie T played. Fantastic. I can't wait for the album.

As if to cement my earlier thoughts about Billy Bragg, the set finished with a fantastic cover of "New England". It's a great song.....perhaps I should rethink my shuffleathon mix.....

And that was it - he was gone. Well nearly..... Sarah and I hung around in the bar after the gig for another drink, and we were delighted to see that Jamie and the whole band came back onto the stage to pack up their own kit and to hand out hand made mix tapes to the audience. He may be destined for big things, but right now Jamie T still helps pack away the drum kit and carry the amplifiers down to the van. I grabbed a tape off him and I'm happy to confirm that he sounds like a very nice lad too. Well, he's 20 years old, so surely I'm old enough to roundly patronise him?

Frankly I'm surprised he knows who Billy Bragg is.