but the feeling's gone and I just can't get it back...

I'm feeling a touch melancholy today. I'm not sure why. It might be that the World Cup has finished with one of my sporting heroes ending his career in disgrace; it might be because I'm listening to Johnny Cash's final album, "American V: A Hundred Highways"; it might be because I've just finished reading the tenth and final volume of Neil Gaiman's "Sandman". 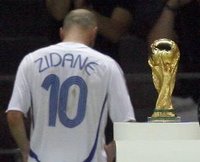 I've spoken about this elsewhere, so I won't dwell on it here.... but after 4 weeks and however many games played in this tournament, the image that is burned into my brain is not the winning captain lifting the World Cup.

The picture that I can't forget is Zidane trudging past the trophy and down the tunnel with his head bowed after his sending off. There's no question that he deserved to be sent off for that moment of madness, it's just that surely it wasn't supposed to end like this? How could it end like this? How is that fair? 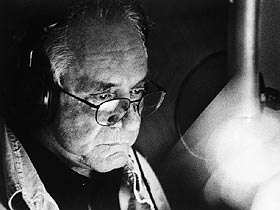 I can't decide if "American V: A Hundred Highways" is the worst album I could be listening to in this frame of mind or the best. Johnny Cash died in October 2003, so this final collection of the recordings he made with Rick Rubin sounds like a voice coming from beyond the grave. The songs are confessional and reflective and speak of impending death and redemption. That deep, majestic voice is still there, just about, but you can often hear its owner struggling for breath. It's incredibly moving.

You would be a hard person indeed not to have a lump in your throat whilst listening to this album. Cash's cover of Gordon Lightfoot's "If You Could Read My Mind" is particularly affecting:

It's almost unbearably poignant. You can almost see June Carter-Cash standing behind him as he sings, or hovering in the background as she does in the video for "Hurt". But she was dead when he sang this, and now Cash himself is dead.

"It should be a while before I see Doctor Death" says Cash in "Like the 309"... the last song he ever wrote.

They don't make them like him any more. An amazing album and a fitting epitaph. 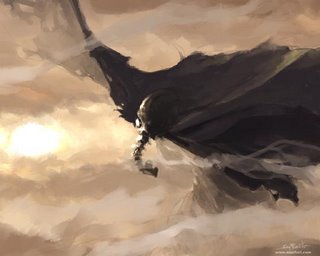 I've finally finished Neil Gaiman's "Sandman" saga too. All ten volumes of it. I won't say too much here because I don't want to spoil if for anyone who hasn't read it.... but my goodness me, what an ending.

One thing is for certain though, whatever else it has achieved (and believe me, it is an absolutely stunning piece of work), Gaiman's saga has definitely given me my favourite anthropomorphic personification of Death.

Omnia mutantur nihil interit. Everything changes but nothing is truly lost.