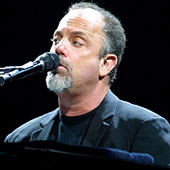 My earliest musical memories are of sitting in front of my dad's HiFi system every Sunday evening listening to the charts and taping any songs that grabbed my fancy. I must have taped hundreds of songs over the years, but for some reason the song that I remember taping the most clearly is "Always There", the theme from "Howard's Way".

My earliest memories of watching music on TV were of rushing to get ready for bed so that I would be able to sit down in front of the telly at 7pm on a Thursday night to watch "Top of the Pops". Of all the songs that I must have seen, the one that I remember the most clearly was a number one single in 1983 and the video featured a little guy dressed up as a mechanic, dancing his socks off in pursuit of some unattainably gorgeous woman in a fancy car. It was, of course, "Uptown Girl" by Billy Joel. It's a great record, isn't it? One of the defining records of the 1980s - certainly for me - and in my opinion it still sounds fantastic today. Well, perhaps it's dated a tiny bit, but it still gives me a warm feeling.

There have been times in my life since when it hasn't been especially cool to admit to liking him, but even in the middle of my heavy metal years I was happy to run out to the shops and buy a copy of "The River of Dreams".

I think Billy Joel is brilliant, and I was more excited about going to this gig than I have been about any concert for some time. I don't really like arena gigs at the best of times, and the NEC is an absolute barn. I've seen some good gigs here (Faith No More, Iron Maiden, and yes...Bon Jovi), but like any arena, the atmosphere can be totally dead and the acoustics dreadful. Most gigs I go to, even those at arenas, tend to have a standing area at the front. I always make the effort to get standing tickets where I possibly can - the atmosphere is just so much better, and you get a much, much better view (not least when you are nearly 2m tall). This one was all seating though, and I did worry that your typical Billy Joel fan was likely to want to remain firmly sat in their seat all night, gently tapping their foot and slowly sucking all the atmosphere out of the place. Well, might as well face up to it: Billy Joel released his first album in 1971 and was at the absolute peak of his commercial success in the early 80s. He isn't likely to attract a very young and trendy crowd, is he? (and yes, I am acutely conscious of the irony in that remark. I'm 32 years old myself, and I'm sometimes very aware that people probably say stuff like this about me when I go to a gig at the Rescue Rooms or The Social).

I shouldn't have worried.

Yes, the crowd *was* made up largely of the kind of people for whom going to a concert is a real outing and who had dressed up for the occasion. Lots of them looked like they were probably accountants. Of course, there's nothing wrong with that at all, but as Lord B has pointed out, if I start going to gigs in a smart shirt, smart trousers and a jacket... do please shoot me (Well, I was actually wearing a jacket, but in my defence, I was also wearing my Ramones t-shirt for the occasion. This seemed to pleasantly surprise the guy at the merchandising stand who felt the need to remark that he hadn't expected to see one of those this evening as he sold me my Billy Joel keyring and "Uptown Girl" badge for C.) To be fair to this audience though, when it came really came down to it though, these people were prepared to get up out of their seats and show their appreciation to the great man. I've been to a lot of trendier gigs at Rock City where the crowd hasn't been half so up for it.

As advertised, BJ came onto the stage at about 8pm, and he stayed there pretty much for the entirety of the next two and a half hours (he had a short break about halfway through the set when he allowed a roadie called Chainsaw to take to the stage and sing a stonking version of "Highway to Hell" with his band). Sometimes gigs can drag if they go on too long... not this one.

How could it possibly drag when the setlist includes songs like: Miami 2017 (See The Lights Go Out on Broadway), New York State of Mind, She's Always A Woman, Movin' Out, Only The Good Die Young, My Life, It's Still Rock and Roll To Me, Allentown, An Innocent Man, Uptown Girl, I Go To Extremes, We Didn't Start the Fire, The Downeaster "Alexa", The River of Dreams, Scenes From An Italian Restaurant and - of course - Piano Man.

It wasn't just the quality of the songs that made this a great night though; Billy Joel was the consummate entertainer throughout. He chatted to the crowd, he read out a marriage proposal, he spoke into someone's mobile phone for them, he cracked jokes - often at his own expense, he bounced up and down behind his piano and, when he wasn't behind his piano, he charged around the stage with more enthusiasm and energy than you might have expected for a short, tubby little guy pushing 60. He was great. A real delight.

I don't think I will see a better gig this year.