When you walk in a dream but you know you're not dreaming.... 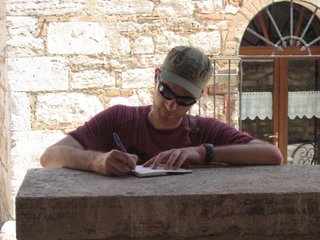 Before I begin, a quick word of warning: if you aren't interested in long posts with lots of photos of Medieval and Renaissance architecture, then you should probably look away now. Still here? Well don't say I didn't warn you. You know I did my Bachelor's degree in Modern European and Renaissance history, right? You are aware that I have a Masters degree in Medieval Studies? It's hard to visit a place like Italy and not have that kind of a dormant interest rekindled, especially if you have a camera.

I've just spent a lovely 8 days in Italy - mainly in Tuscany, but with a couple of brief stops in Umbria. It's a lovely country. They have a gorgeous climate, delightful scenery, a rich and varied history that has left them a wonderful architectural and archeological legacy, their cuisine is irresistable and the people themselves are generally warm and friendly. They can't drive for toffee, have no concept of braking distances and personal space, are terrible poseurs and letches, but in the main they are a lovely people.

The main reason for going was to attend the wedding of C's brother, and the first few days of our holiday were spent in the Southern Tuscan town of Manciano. The wedding itself was delightful: the happy couple were married by the town's mayor (an extremely dapper and charming man) and we then had one hell of a party. As you might expect from a family where the bride grew up in England, Holland, Italy and Spain and where the groom grew up in England and France, it was a really diverse gathering, with people coming from all over the place to celebrate the wedding: Holland, Italy, Russia, Australia, the USA, Spain, France, Austria and England.... needless to say I was the charming polyglot and spent most of my time talking to cousin Helen from Halifax (although I did spend some time talking to Chris from Sydney about all things sporting, and for the record he's very much looking forward to this winter's Ashes and is expecting a close series). Anyway. We had an enormous meal, plenty of wine and champagne and then had a little boogie. The bride and groom led the way - their first dance was to give it everything that they had to "Let's Spend the Night Together" by the Rolling Stones. It was that kind of a night. I called it a day at about 03:30, but C. carried on dancing her little heart out with her big brother until about 07:00 the next morning when she managed to drag herself out of the pool at the venue, pick up her clothes and stagger onto a minibus that took her home (where her mum was waiting up for her....)

As we recovered from hangovers of varying proportions (and believe me, as C. doesn't drink very much, it isn't often that I get to sit on this particular high horse, and yet under the circumstances I felt that I was heroically restrained...) we took in the local sights: the Etruscan hill town of Pitigliano, the beach at Ultima Spiaggia and the hot springs at Saturnia - where we watched the shooting stars at midnight. 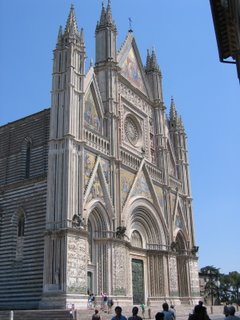 It was lovely, but after a couple of days with her family, I could see that C. was itching to escape. We finally got away on the Tuesday and headed into Umbria to have a look at Orvieto. The town itself is pretty enough (and sitting on the top of a mound of volcanic rock, it dominates the landscape for miles around), but the real gem here is the Duomo. This was built in the thirteenth century and has the most amazing facade with huge columns, massive doorways and some amazing sculptures depicting scenes from the Old and New Testament and from the Last Judgement. 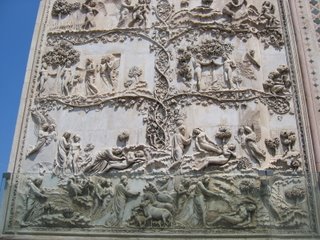 The creation story on the duomo facade at Orvieto

The detail is amazing - if you look closely you can see God surgically removing one of Adam's ribs to create Eve, you can see the serpent around the tree of knowledge, Adam and Eve hiding from God as they become aware of their nakedness.... 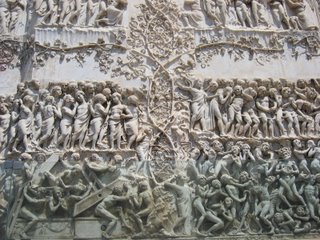 The Last Judgement on the facade at Orvieto

My favourite was the Last Judgement though - the Saved look a bit smug to me, but I was transfixed by the Damned. Look as they climb from their coffins on the bottom left-hand corner and then see as they meet with their fate on the right-hand side as they are consumed by serpents and demons. 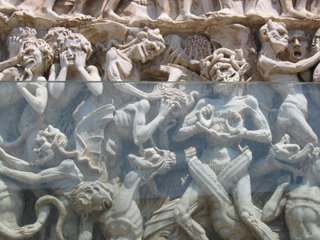 Detail from the Last Judgement at Orvieto

Satan looks great, doesn't he? I don't know about you, but to paraphrase Billy Joel, I'd rather dance with the sinners than cry with they saints. The devil has all the best tunes and all that.

The interior of the Duomo is also notable for a couple of other things: Signorellis frescoes of the Last Judgement, and the rather sad little collection of motorbike helmets in one corner, presumably there as memorials to the enduring insanity of Italian driving [edit: on second thoughts, I think the helmets were actually in Siena. Funny how all these Duomos start to blur together.] 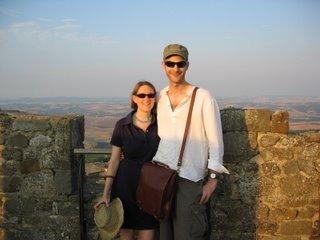 The fort at Montalcino

Our next stop, and our base for the next three days was the Tuscan hilltown of Montalcino, home (as I was soon to discover) to what is reputed to be the finest wine in Italy - the Brunello di Montalcino. It is delicious, is served with pretty much every meal, and yes... we have come back with several bottles that we will be cellaring with C's father until it's ready to drink in about 5 years (no such thing as instant gratification in this game, apparently, although the Rosso di Montalcino is also very quaffable, cheaper and ready to drink now.)

Night one:
homemade pasta with a simple tomato, garlic and basil sauce
Tuscan sausage with beans
Cantucci with vinsanto wine.

Fantastic. All the food was good, but Montalcino was especially good. 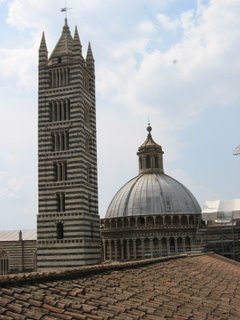 Just a short hop from Montalcino is Siena - home of the famous Palio horse race. It's a little touristy for my tastes, but it has a magnificent oval Campo (where the race takes place twice a year) and another splendid Duomo - this one featuring a pulpit with another memorable scupture of the last judgement with the self-satisfied looking saved and the damned being consumed by serpents. There's also a pleasing set of Pinturicchio frescoes depicting the career of Pius II. If the pictures are to be believed, he was such an incredible diplomat that had he lived in our age, he would have been showered with Ferrero Rocher.

My one complaint? It was bloody impossible to find a replica Siena football shirt. AC Milan, Juventus, Inter Milan and Fiorentina? No problem. The local team? Forget it. Sorry about that Lord B..... you'll have to make do with a bottle of the local plonk instead. 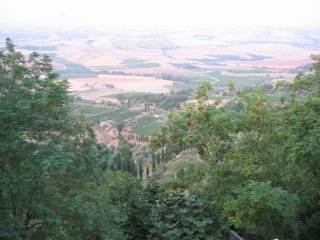 The view from our hotel balcony - Montalcino

All in all a pretty good base for exploring the region - we even nipped up to Florence to fight our way through the tourist hordes to wander around the markets (we've both been to Firenze before, and so have been around the Uffizi, the Accademia and so on.... so we went shopping instead). 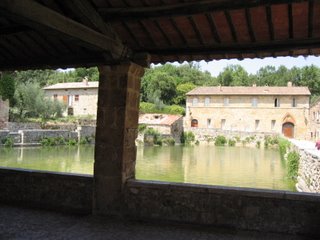 Are you still with me? I'm afraid I'm rather starting to bore myself. Honestly. It may sound dull, but it was actually a really fantastic holiday. A much needed break.

Before we headed back to Rome and a functional stop in a nothing hotel near the airport, we popped in to Bagno Vignoni and Pienza before hitting the motorway. Bagno Vignoni is, as the name rather implies, another hot spring. It's a pretty little town with its main square dominated by an ancient pool. It's no longer in use, but is still filled with steaming hot water from the underground springs. To actually take the waters you can either go to the local four star hotel or you can walk a bit down the hill and hop into a natural pool at the bottom of the hill. We opted for the latter, and I spent a very happy half hour covering myself in clay and washing it off in warm (and yet, in the 40 degree heat, pleasingly cool) water.

Then off to Pienza. 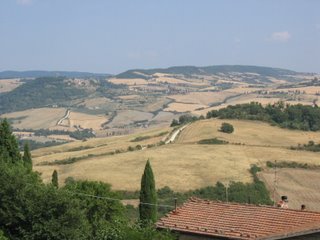 The Orcia Valley seen from Pienza

Pienza - like Florence - is a UNESCO world heritage site. It is where Pope Pius II decided to build the first Renaissance "ideal city", intended as a vatican in minature, with a duomo and Papal palace nestled into the hillside, commanding magnificent views of the Orcia valley. It's nice enough, and the views are breathtaking, but it seems a little austere to me. The Duomo is also slowly but surely collapsing. Apparently it has foundations built on sandstone, and there is a very definite lurch downhill in the nave and some rather alarming cracks in the floor and across the walls. I can't imagine that the Italians would just let it fall off the edge of the hill, but it would be rather a shame to lose it. It would rather change the look of the place, for one thing. Still, if they can save the Leaning Tower of Pisa, then I imagine it should be well within their capabilities to prop up a cliff.

With just one more stop to see the remarkable 10th Century Romanesque church (Pieve di Corsignano), that was it.... we were off back to Rome. 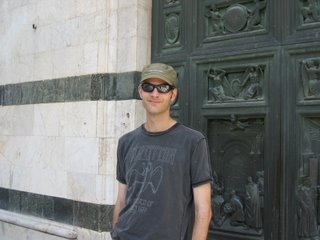 yes... I was welded to that hat and those sunglasses all week. What's your point?

It didn't take long for how good the holiday was to be put back into perspective: the airport was filled with the usual "people in transit" horrors. What is it about moving between point A and point B that brings out the worst in people? Our flight was delayed by an hour because a family of people who had pushed and shoved their way to the front of the queue to board the plane realised - once boarded and seated - that they were in fact on the wrong plane and needed to change to one that was going to London. You have to laugh really. In spite of all the security checks we went through, and in spite of the number of times that our boarding passes were inspected, these people would have landed at East Midlands airport had they not realised for themselves that they wanted to be at Gatwick instead.

Nevermind that though. It was on the cab ride home past all of the theme pubs filled with pasty-faced chavs in their leisure wear that I realised what it was about Italy that I really liked.... I like the fact that the Italians spend their money on clothes and generally looking good and only drink with their meals, not recreationally. I like the fact that they have a proper food culture, and that even the most humble motorway service station will serve you a proper green salad with a proper dressing and breadsticks. Oh, I've not gone soft. I know that the Italians are not perfect - far from it, and you wouldn't see many English men with a shaving rash around the edges of their Speedos, for starters - but it was nice to get away from the English underclass for a few days.

Still I'm back now, and apparently the chav will still inherit the earth.