would you lay with me and just forget the world?

Why is it that the week before you go on holiday is always the busiest week of the year? This Friday, C. and I are flying off to Italy to attend her brother's wedding in Tuscany. We will be spending the first four days on wedding duties, but from then onwards we are on our own for the rest of the week and will be leaving the family and tootling off to a little hotel that we will use as a base for exploring the area.

... but that's not for another few days yet.

I expected that my four days at work this week would be madness, but I wasn't really expecting to have an action packed weekend as well.

Friday was alright. I escaped the office at a respectable hour and then took advantage of C. disappearing off to a Salsa night to have a relatively quiet evening: a swim and sauna at the gym, a bit of telly, a bit of playstation and then an early night. So far so good, and then Saturday happened. C. has been looking for a new outfit for the wedding for a number of weeks now with no success (each outfit was carefully selected, tried on in the shop, purchased, brought home to enable photos to be taken and sent to her mother in France for assessment before the dress is then returned to the shop and the search begins again.) The news that the bride will be wearing Max Mara, the groom Paul Smith and that even her dad will be modelling a new suit has given new focus and determination to the quest. This was our last chance.

I hope my enthusiasm for this is coming across OK.

Actually, I'm not being fair. C. has done most of the looking on her own, and I have hardly been dragged around the shops at all. We did look for dresses, but C. has more or less decided that she likes an outfit that she already has more. We did buy me a shirt and tie though.

Anyway. Long day shopping, then back home for a run and some tea before beginning the laundry preparations for the holiday - sorting out the things that need to be washed to be ready to be packed. Again, I can't pretend that this is any great hardship for me, as C. does far more than her fair share here, but it's at times like these that the holiday is starting to seem more like a military operation than some time away from work to relax.

I had to get up early on Sunday too. You might remember that my elder brother has a Korean wife (we went to Seoul for the wedding last May). Well, the parents-in-law are over at the moment, so we were invited to a family day out...... 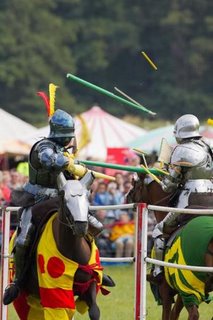 We went to Kirby Hall in Northamptonshire to watch the latest round in The Knight's Tournament. This is pretty much what is says on the tin:

"Cheer on your heroes as they are put through their paces in jousting, archery, sword-fighting and mounted skill at arms"

There were jesters and minstrels, there were a couple of really excellent falconry displays and there was some full-on proper displays of skill at arms by guys dressed up in full armour. It sounds cheesy, but it was actually very well done and was a great way to spend a gloriously sunny day. Better yet was the news that the picnic was being provided by the Korean side of the family - so we had delicious hand-made sushi rolls. Mmmmmmm. 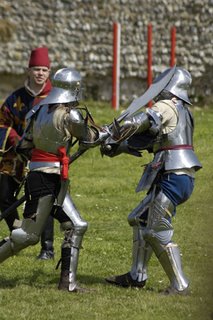 The tournament was contested by four knights (and their Squires), each representing a region of the kingdom (North, South, East and West). I couldn't tell you who won, but judging by the number of people who turned up, English Heritage are definitely onto a winner.

We drove home, nipped out for a quick drink to celebrate a friend's birthday and set about planning an exciting evening of more laundry, soup for tea and an early night. 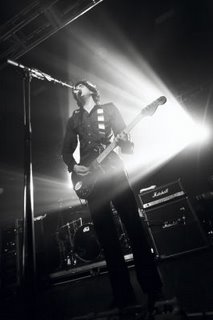 At about 8pm, the phone rang. Did I want to come to the concert tonight? Lord B. and I had spotted this gig a few weeks ago: Snow Patrol are currently touring enormodomes around the world in support of their last album, "Eyes Wide Open". They don't do the UK leg of the tour proper until November when they are playing places like the Birmingham National Indoor Arena, the Manchester MEN Arena and Wembley Arena. I have distinctly mixed feelings about watching bands playing in arenas, so I was delighted to see this rogue date at Rock City. A little bit of investigation revealed that this was a charity night in aid of the Cancerbackup charity, but sadly also revealed that there was literally only a single ticket left. Lord B. took it and I put the gig out of my mind.

So, C. and I happily ditched our exciting plans for the night and hot-footed it into town to meet up with Lord B. and Sarah and head into the venue. I like Snow Patrol. For one reason or another, I ended up seeing them live 4 times in 2004. That last time, I listened to them playing a more or less identical set with no new songs and I wondered if they were going to be able to follow up "Final Straw" or if they would slowly slide back into obscurity. Well, I think that the release of "Eyes Wide Open" answered that question. Perhaps it isn't quite "Final Straw", but it is an excellent album in its own right.

The band take to the stage at about 22:30 (so much for my early night) and it is immediately apparent that something has changed; something is different, something wonderful - Gary Lightbody has finally had his haircut. That ridiculous Rowlf-from-the-muppets style he's been wearing for much of the last year has finally been replaced by a crop. Hurray! They launch straight into "Spitting Games" and we're off and running.

It's a brilliant, brilliant gig. A real feature of those Snow Patrol shows I saw in 2004 was how wonderfully thrilled the band always looked when they played "Run" and the whole audience sang it back to them. I think that perhaps the most remarkable thing about last night's gig was that the novelty clearly still hasn't worn off. The enthusiasm with which the crowd sang along to current single, "Chasing Cars" clearly took the band by surprise. Perhaps they've been playing arenas for just long enough to appreciate playing a show in front of 1,900 passionate fans in a smaller venue. It's a beautiful song though, and it must be magical to see that they have written another song that so clearly connects with people. Gary Lightbody and new bassist Paul Wilson couldn't wipe the smiles from their faces for the rest of the gig. Big guitarist Nathan Connolly is a bit more dour looking, but I reckon I caught him grinning a couple of times too. When they finished the song, the audience reacted as though they were calling the band back for an encore rather than only a handful of songs into their set. We stamped, we cheered, we screamed, we clapped.... and the band could only stand on the stage and watch with amazement. It's a killer song and it could be massive (I think it's out to buy this week actually).

They played for 90 minutes in all and they were ace. The crowd was really, really up for it for the whole gig and went into an absolute frenzy as the band closed their set with "Run" and "You're All I Have". "Run" in particular was sung so lustily by the audience that Lightbody felt the need to remark that they hadn't heard it sung so passionately for a long time - they've definitely been playing in too many arenas. I initially thought that "You're All I Have" was a slightly odd choice as a single - it's a catchy but slightly awkward song. It makes perfect sense live. A quick encore and that was it.

Ah. It was an amazing night.

Even bumping into Sandi Thom on the way into Rock City couldn't spoil the night for me (you know, she *looks* like she's spent a lot of time in her basement. On balance, I think it would be better for everyone if she went straight back in there and shut the door - once her webcam has been confiscated, obviously).

Without a shadow of a doubt one of the best gigs I have been to in a long time. The fact that the band and their whole crew were playing for free to raise money for an excellent cause only makes the night sweeter.

The rating? I've had a little philosophical debate with myself today to see if I think it's possible to ever attend the perfect gig.

(thanks to Lord B for the tickets, and big shout out to John from Verbal Warning who had the spares in the first place. The perfect end to a busy weekend.)
Posted by swisslet at 18:28