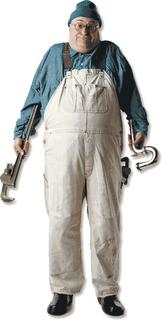 At first I thought there was a fly trapped in the rubbish bag next to the back door. Further investigation revealed that the strange hissing, buzzing noise was in fact coming from the pipes. Or perhaps more accurately, the noise was coming from the tiny hole in the water main and was being caused by water under pressure being forced out.

Making the pub quiz began to look optimistic and I began to hunt around for the house insurance details.

"Is the leak coming from within the boundaries of your property or from the water main?"
"Well, it's coming from the water main below our stopcock, but it is inside the property. In fact, it's in my kitchen."
"Was it damaged accidentally?"
"No. It just started to leak"
"Then it's not covered. You need to talk to the Water Board."

Thinking salty thoughts about the point of home and contents insurance if it won't cover damage to said home and contents, I picked up the phone to the 24 hour helpline at Severn-Trent Water.

A call back to the insurance company and it turns out that actually they *are* liable for any water damage to our property, so they are prepared to get an emergency plumber out for us. Clearly they didn't feel the need to tell us about that during the first call. Perhaps they didn't think it was pertinent.

We arrange to meet the plumber (he calls us when he arrives and we leave the pub quiz to let him in). He takes one look at the pipe:

"I know it sounds funny, but I just need to get my hammer"
He then proceeds to bash the bit of lead piping (our house is over 100 years old, so although most of the piping is now made of copper or plastic, there is the odd bit here and there that are still made of lead). Apparently this can stop most leaks.

The water turns from a small trickle to a modest gush, but some more hammering takes us back to where we were originally. The plumber promises to come back in the morning to fix the leak properly by replacing the bit of piping.

The next morning and the leak has got slightly worse. I go to work knowing that C. needs to leave to catch a flight at 11am. I cancel a few meetings and head home to allow C. to scoot off to the airport. I find her in a right state. The plumber has been unable to stop the leak and has left her on her hands and knees constantly changing towels in a desperate attempt to stop the kitchen from flooding. She nearly forgets her passport, but leaves on time. I start to wring out some towels when the plumber turns up again.

He tries, and partially succeeds. Now I have to wait for the man from Severn-Trent to turn up and switch off the water supply. I wait about 30 minutes and then he arrives and begins to fiddle with the piping underneath the pavement outside our house.

"I can't switch the valve off. I think I'll need to request an emergency repair"
"How long will that take?"
"Well, it won't be today"

I now have visions of spending every 10 minutes for the next 24 hours changing towels and mopping up water underneath a leaking pipe. Luckily, after much fiddling, he is able to turn it off and the leak stops.

I'm currently sat in my kitchen waiting for the plumber to turn up and dig up some of my kitchen tiling to replace the defective piping.

Oh, apparently his van has broken down in Mansfield and he's not going to be able to get here until 6pm.

It's turning out to be one of those days....

(and a big hello to the friendly face of the Bloglines plumber above! Is it me or is that Harold Bishop moonlighting?)

Well, the water has been off, the kitchen floor drilled and a new piece of pipe put in. Sadly, when the water was turned back on, there was still a small leak. Nothing catastrophic, but still something that needs sorting.

I think I want to scream. I think my plumber wants to scream too.

It's good this, innit?

And I've got a preliminary session with the hypnotherapist tomorrow.....

I think he's cracked it!

Some horrible gunky stuff, a bit of tightening and some windy, wrappy stuff appears to have stopped the dripping. Finally. Touch wood.