the monkeys stand for honesty, giraffes are insincere...

---
Bank Holiday weekends are great. It's only twenty-four little hours, but there's something about having that extra day off that just seems to make all the difference.

I don't usually do anything much with my bank holidays. I might spend a bit longer in bed, watch a bit of telly, pop down to the pub. That kind of thing. I was determined that I should make a bit more of an effort this time though, and so on Sunday morning, thanks to some free tickets we'd won in a raffle, we packed up a picnic lunch and we got in the car and drove to Twycross Zoo.

I'm not a massive fan of zoos, to be honest. I know that they have an increasingly important role to play in the preservation of endangered species, but there's something wrong about having these animals caged up in such small enclosures. It's bad enough for the smaller animals, but I really struggle to see how it can be anything other than cruel to keep an animal like a leopard or a lion in a cage that's too small for them to be able to run, or in fact to be able to do anything much but pace relentlessly around the edges of their sadly reduced world.

They did have some cute meercats though, and I have also discovered exactly what it is that Prince Harry does with his spare time (when he's not dressing in Nazi uniforms, smoking dope and groping poor unsuspecting girls, obviously.) 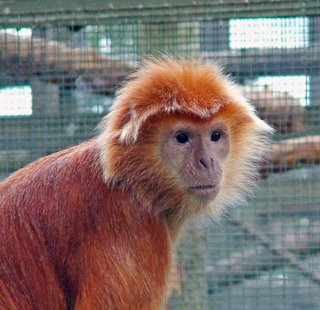 That's right. Prince Harry is a Javan Brown Langur, and his cage is just next door to that of a Diana Monkey. Coincidence? I don't think so.....

The zoo was a little bit too full of rude, squalling, fat, greedy, grasping little shits and their oblivious parents for my liking, but I suppose that was only to be expected on a bank holiday weekend in the middle of the school holidays.

Still, it got us out of the house, eh?

And as if that wasn't enough excitement for one day, we followed up our visit to the zoo by winning the music quiz at the pub last night. It was the first time they've run it, but I reckon that Lord B and I are going to be pretty tough to beat at this...

Whilst we're on the subject of monkeys, we watched Kong on Saturday night. Would someone mind explaining to me what the point of that film is? The effects were pretty good, it's true, but I couldn't see how it added anything to the story that any of the previous versions hadn't already covered. Mysterious island? check. Giant monkey? check. Screaming blonde? check. Inevitable tragic scenes atop the Empire State Building? check.

What did this film do that the Fay Wray version didn't do back in 1933?

...and I don't mean to put a downer on anyone's day, but you do realise that this is the last bank holiday in England before Christmas?

It's a bit of a long haul through the winter from here on in, I'm afraid.